MOMI LEARNS| Look before you leap

For the past few days, I have been reading to my little man who has been ill.  He dislikes eating, and it worries me too much.  I would read to him to entertain the little guy and in the process, lure him to eat.

Anyway, one story we read was about  The Mongoose and The Child.

The mongoose and the child 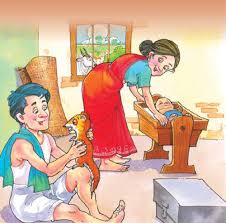 The mongoose and the child: Look before you leap

Once, there lived a farmer and his wife. They had a little son. The farmer had a pet mongoose. The little boy and the mongoose were fond of each other. They were good playmates.

One day the farmer was busy at his fields. The farmer’s wife had left to the market. The little boy was fast asleep in a cradle. The mongoose was lying down near the cradle.

A cobra somehow got into the house, and it was nearing the little boy. The mongoose sniffed the snake and jumped up. He fought with the cobra. The cobra began to attack. There was a fierce fight between the cobra and the mongoose. The mongoose finally bit and killed the cobra.

The farmer’s wife took a long stick and gave heavy blows on the mongoose and then ran into the house. She was shocked to see a dead cobra lying on the floor near her son. Now she realized her mistake. Her sorrow knew no bounds.

The grandmother and the grandson

My mother visited us one afternoon.  She saw Second Son wearing the new jeans and shirt she bought for him.  My mom readily reprimanded my boy.  She told my son he should not be wearing his panlakad at home.  Second Son, on the other hand, reasoned out he just came from a church meeting that morning and still needs to attend a prayer vigil later at night.   Thus, he didn’t bother remove his clothes.  My mom seemed not to listen and ordered my son to remove his clothes pronto.  She shouted real loud, made accusations and said hurtful words.  My boy, who must have felt helpless, repeatedly said “You’re not listening.”  He cried as he said those words.  Then later, began to raise his voice, too.  This angered my mother.  She left the house after a few minutes and told me to talk to my son.

The mother and her son

I let my son finish his meal first before I talk to him.  I said it was wrong to shout at his grandmother.  He acknowledged his mistake.  He explained to me he decided not to remove his clothes as he still needs to go out.  It would save me from washing extra clothes.

I got his concern. Just like the mother from the Mongoose and the Child story, my mom made an assumption about the situation without knowing all the facts.  The circumstance left my son powerless to defend himself thus he was tempted to let himself be heard.  Unfortunately, it left a bad impression on both my other children and my mother.

Lesson of the story

Look before you leap.

Often, we quickly jump into conclusion upon initial evidence only.   We tend to be blinded of what we saw first that we decided not to look further with an open mind.  Let us all practice to look before we leap and free ourselves from being controlled by our thoughts.   It would surely be liberating to look at the world with an open mind and not easily jumping into false conclusion.