I had an emergency appendectomy nine years ago.  It was one of the seven operations done to me.  The five were for birthing while the other one was dilation and curettage (D&C) because of a missed abortion.

The doctor removed my appendix, the small tube connected to my large intestine in the lower right side of my belly.  My appendix became inflamed and was filled with water made up of dead cells and inflammatory debris.  If not treated immediately, it may rupture, release bacteria into the abdomen, and lead to life-threatening infection.  The doctor told me I was too close to that.

I just felt pain that early morning, and since my mother – who happened to visit us that day – can no longer take seeing me in pain, requested husband to bring me to the hospital.  At the hospital, we learned that that strange water fills my abdomen. The doctors immediately underwent an emergency appendectomy.

Though it has been nine years, the three-inch scar on my lower right side of the abdomen remains there.  It becomes dark in color, somehow raised.  The scar lightens with time but still very noticeable. Such types of scars are said to be keloids.

Then two years ago, another scar added up, this time from my cesarean operation.  The scar, just like the first one, is raised, thicker, and even extends beyond the original incision.

I have no plans of removing or lightening them as I’ve accepted the scars to be part of me.  Not until I received a gift from Merz.  They gave two tubes of Contractubex and a few pieces of intensive patches to try. 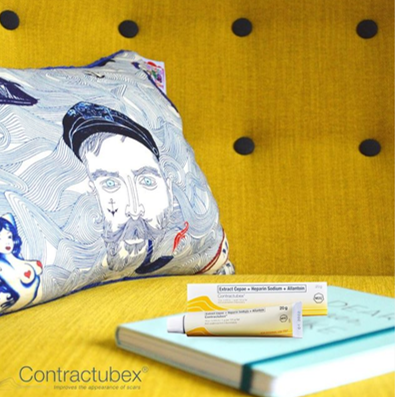 Honestly, I didn’t use the topical gel right away. By chance, I happened to read a friend’s review of the product, and that review pushed me to try Contractubex.  I have known this friend as someone who values integrity; thus, her blog post speaks of truth.

And indeed, she is.

Contratubex is also true to its claim to significantly reduce the appearance of scars if not fade them off completely.  The gel contains three active ingredients to help properly repair the skin: extractumcepae – nion extract, heparin, and allantoin.  The first ingredient is an anti-inflammatory that helps prevent excessive scar tissue formation. The second one helps promote cell and tissue regeneration, while the last soothes the skin.

I still believe that these active ingredients may differ their effect to individuals, but from the several reviews I’ve read, they swear by the product’s effectivity. Personally, this gel has lightened my keloid scars relatively quickly. I’ve been using it for about two weeks and seen a positive result already.  I rub the transparent gel on my scars three times a day.  The instruction says that for old scars, it may take up to six months to see the full effect of the topical gel.  But this early, again, I see results.

I like that Contratubex isn’t slimy nor sticky.  It has a cooling sensation, which makes me imagine that the gel is penetrating deep into my scar tissues.  Also, its smell isn’t annoying; it gives a rose-like scent that doesn’t hurt my sense of smell.

I plan to continue using Contratubex, and I hope to see a more flattened and lightened scar in months from now. This isn’t much of an expectation but a reality.