MOMI LEARNS| Forgive but do not forget

They say, forgive and forget.  Though hard, I would always pray that I find it in my heart to forgive those who hurt me.  I do not know if I was able to do that already as I would still feel uneasy whenever I am with the person I would rather choose not to see.  But what I am certain is this – Letting go of anger and bitterness can work wonders.  Not only for my outlook but for my health as well.  Not to mention the relationship I have with that person.

However, the recent story we read about the Man and the Serpent taught us otherwise.  It said, forgive but not forget.

The Man and the Serpent 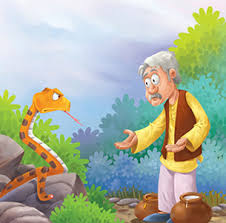 A countryman’s son by accident trod upon a Serpent’s tail, which turned and bit him so that he died. The father in a rage got his axe, and pursuing the Serpent, cut off part of its tail. So the Serpent in revenge began stinging several of the Farmer’s cattle and caused him severe loss. Well, the Farmer thought it best to make it up with the Serpent, and brought food and honey to the mouth of its lair, and said to it: “Let’s forget and forgive; perhaps you were right to punish my son, and take vengeance on my cattle, but surely I was right in trying to revenge him; now that we are both satisfied why should not we be friends again?”

“No, no,” said the Serpent; “take away your gifts; you can never forget the death of your son, nor I the loss of my tail.”

Forgive but do not forget

Perhaps there would always be that someone who hurt us badly and it’s just so hard to forgive.  But then to let go of our anger and forgive is something we are expected to do as a Christian. Though hard, may we find it in our hearts to forgive, not for them but for ourselves.  To forget, though, is entirely different.  And it is only now that I am able to reflect on this –

To forget, however, is not a necessity so we can take the valuable life lessons with us.