Another story session and my little man remained quiet throughout our reading time.  He seemed too absorbed or he just can’t understand the story.  So I requested his three other brothers to join us instead as I retell the story of the Monkey and the Cat.

The Monkey and The Cat 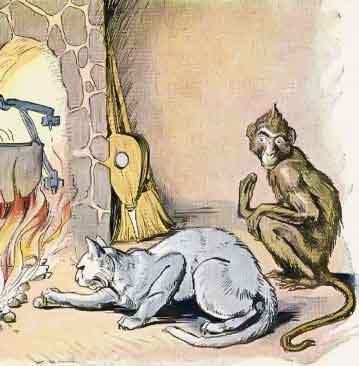 There’s no honor among thieves

A Monkey and a Cat lived in the same family, and it was hard to tell which was the greatest thief. One day, as they were roaming about together, they spied some chestnuts roasting in the ashes. “Come,” said the cunning Monkey, “we shall not go without our dinner to-day. Your claws are better than mine for the purpose; you pull them out of the hot ashes and you shall have half.” Pussy pulled them out one by one, burning her claws very much in doing so. When she had stolen them all, she found that the Monkey had eaten every one.

There’s no honor among thieves

A thief cannot be trusted, even by another thief

I do not like to generalize but then to save themselves from further pain, I often tell my boys that thieves honor no law.   Thieves, on the first place, break the law, therefore are not bound by it.  They have no honor for the law so it is better to avoid dealing with them.

But more than that, I reiterated that they should not dare try living the life of a thief.

← MOMI LEARNS| In yielding the rights of others, we may endanger our own MOMI SHARES| Absolute Love. Absolute Water. →