I have a confession to make.  I hid my pregnancy from most of my friends and even to my mother.  My reason?  Read on to know more. 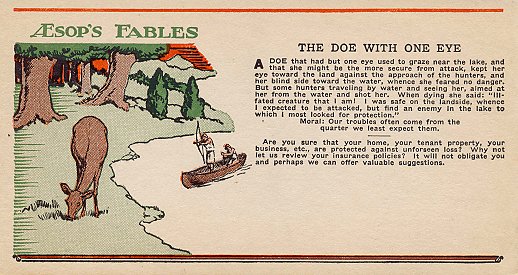 A Doe had had the misfortune to lose one of her eyes, and could not see any one approaching her on that side.

So to avoid any danger she always used to feed on a high cliff near the sea, with her sound eye looking towards the land. By this means she could see whenever the hunters approached her on land, and often escaped by this means.

But the hunters found out that she was blind of one eye, and hiring a boat rowed under the cliff where she used to feed and shot her from the sea.

“Ah,” cried she with her dying voice: “You cannot escape your fate”.

Funny that on my fifth pregnancy, I wasn’t able to tell my mom I am pregnant.  I simply can’t because I am still nursing a less than two-year-old baby.  Good thing my mother would only visit our house at night and every time she visits, I always have my little man by my lap breastfeeding.  She didn’t know anything until one day.

We were alone in the car when my mom suddenly asked me “Are you pregnant?”  I answered yes.  She further told me it was my Second Son who mentioned to her “I think mama is pregnant.  Her tummy is growing big.”

You cannot escape your fate.

I am pregnant and sooner and later everyone would know, my mother included.  It is something I cannot hide forever. Any attempt to control fate by doing the logical thing remains futile just like the doe who tried to escape her fate from dying because of her defect.