MOMI LEARNS| Aesop’s Fable The Ass and The Charger

Have you heard of the story of the Ass and the Charger?  It promises such beautiful moral which taught my Firstborn not to be envious of other’s fate.

Aesop’s Fable The Ass and the Charger 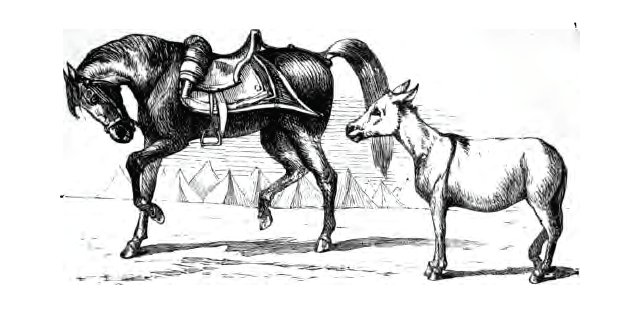 Aesop’s Fable The Ass and The Charger

An Ass congratulated a Horse on being so ungrudgingly and carefully provided for, while he himself had scarcely enough to eat, nor even that without hard work.

But when war broke out, the heavy-armed soldier mounted the Horse, and rushed into the very midst of the enemy, and the Horse, being wounded, fell dead on the battle-field.

Then the Ass, seeing all these things, changed his mind, and commiserated the Horse, saying: “How much more fortunate am I than a charger. I can remain at home in safety while he is exposed to all the perils of war.”

The Firstborn and the Classmate

Firstborn is such a big help.  He is in charge of sweeping and mopping the floor on weekends.  He would do the same when classes are suspended.

One day, Firstborn forgot to log out his Facebook account.  I checked his chat box and read a few chat messages.  I learned that one of his girl classmates does not do any housework.  They have, after all, a house help to do such task.  Our boy may not have raised the issue to me but I know he somehow envies his classmate.

Severals weeks later, we went to our son’s school for his recognition. He placed Second Honors.  His girl classmate topped the class.  He congratulated his classmate and introduced me to her.

On our way home, I told Firstborn I heard his girl classmate swore and even used a few foul words.  He then said “I thought she lives like a princess.  She does nothing at home than stay in her room most of the time and there study our lessons.  But then she told me she has no choice.  She doesn’t like to mingle with her mother’s family if she’s at her house.  She doesn’t like to face her other siblings from her father’s side either.  So she just stays inside her room and study.

Be not hasty to envy the condition of others.

Just like the ass, Firstborn quickly felt envious of his girl classmate.  He thought she lives like a princess while he needs to help at home.  He later found out he has a house where he could freely watch any television show or eat anything he finds inside the ref.  He has his room, though shared with his two younger brothers, to give comfort anytime he wants to sleep. He has a father and a mother living together who teach him values and responsibilities.  And most of all, he has a complete family that supports and cares for him.