“Don’t let the chance slip by.”  This has always been what my mom reminds me.  Thus, the same advice I would always tell my boys.  Pretty much the lesson The Hawk and the Nightingale would want to share with its readers. 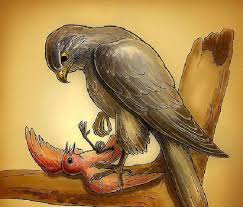 Don’t let the chance slip by

The Hawk and the Nightingale

One day a nightingale was singing from the top of a tall tree, as nightingales do.  A hawk was just then passing by.  He heard the singing and then saw the nightingale.  He swooped down and caught the little nightingale in his claws.  “Please,” Mr. Hawk, “Let me go,” squawked the nightingale.  “I’m too little to make a meal for a big bird like you!”  The hawk didn’t stop for a minute and flew off with his tasty little snack.  He knew that he might not find another meal for quite a while so he decided to eat the nightingale while he had the chance.

The Second Son and the Buffet Table

I once attended a parenting seminar.  My second son and Little Man came with me.  Lunch came and a variety of food was arranged on the buffet table.  I told my 13-year-old son to fall in line and serve himself as I look after our 20-month-old boy.  Our table number was called first to fall in line.  My boy, however, told me he will wait for the line to finish.  He reasoned he does not like to stand that long.  The kind waiter, upon seeing me very pregnant, offered that he will serve me food instead.  I agreed.

After a few minutes, I saw my Second Son still quietly sitting.  I again asked him to get his own food as I already got mine.  He reiterated he will wait for the line to finish.

Finally, he stood up and went to the buffet table.  He returned to our table with a bread and very little serving of a pudding.  “Why didn’t you get pasta? You will starve with that kind of food.” He told me there was nothing left on the buffet table.

Don’t let the chance slip by

Don’t let the thought of greater things prevent you from enjoying what you already have.

Unlike the Hawk, my Second Son didn’t use the opportunity presented to him.  He starved that day.  He thought by being the last in line, he would better enjoy his food with less effort standing and waiting in line.  On the contrary, no food ever reached his plate anymore.