MOMI LEARNS| Lesson from the dog and his reflection

My 18-month old son must have missed our story telling session.  For a week, we have been camping instead in our living room.  Husband set up the boys’ old Spongebob tent for our little man.  And for a week now, the tent has been in our living room as our baby prefers to play, sleep, and even eat inside.

Anyway, this morning, we read the story of The Dog and His Reflection.  Let me share with you the story.

The Dog and His Reflection 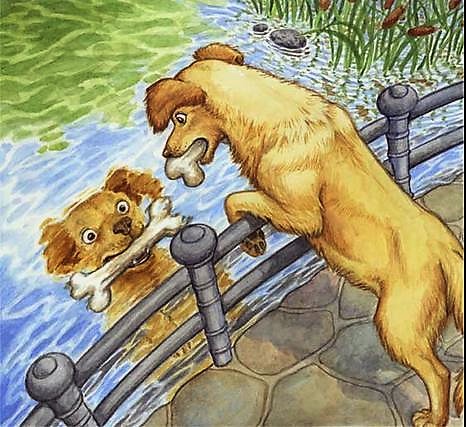 Lesson from the dog and his reflection

A Dog, to whom the butcher had thrown a bone, was hurrying home with his prize as fast as he could go. As he crossed a narrow footbridge, he happened to look down and saw himself reflected in the calm water as if in a mirror. But the greedy Dog thought he saw a real Dog carrying a bone much bigger than his own.

If he had stopped to think he would have known better. But instead of thinking, he dropped his bone and sprang at the Dog in the river, only to find himself swimming for dear life to reach the shore. At last, he managed to scramble out, and as he stood sadly thinking about the good bone he had lost, he realized what a stupid Dog he had been.

The Elderly and the Spaghetti

The story of the Dog and His Reflection made me remember the incident my mom relayed to me weeks ago.  My mother is a member of the Senior’s Group within our subdivision.  Last February, she celebrated her birthday along with the other senior members.   She bought two big baskets of spaghetti and loaves of bread.  Nine others were celebrating their birthdays as well, thus food was overflowing.

Some senior members of the group volunteered to divide the food among members.  Funny that though there was a surplus of food, those senior members only put a small portion of each dish on the plate leaving a great quality of leftovers for themselves.  After the party, my mother and some elderly saw the big food containers full of food being carried by those volunteers.  One senior lady told my mom that those volunteers are known for such act.  My mother could not help but comment, “I thought they made sacrifices for us but in truth, they rob us of our food so they could have more food on their table.  But they will remain poor because they choose to live in that kind of sinful lifestyle.”

Moral of the story

I have come to know one of the elderly persons my mom was referring to. When I was in temporary need of a household help, that woman worked for us.   My husband though advised that we terminate her services the soonest possible because of trust issues.

Greed will bring nothing.  Not content with what they have in life, some people grab things and opportunities they could have that make life even better. Or so they think.  But the truth is, they are creating a bad name for themselves.  They destroy people’s trust on them.

My little man may still be very young to understand the lesson of The Dog and His Reflection.  But I will repeat the story to him, so he will not forget until the time comes he is old enough to comprehend everything.  And I also pray to our dear Lord that may He guide my son’s parents that they not fall into greed’s trap.