Perhaps, aside from birthdays, children appreciate Christmas the most. They get to receive gifts, and the food is just overflowing.

Christmas is also the time for reunions and meetups. Visiting friends and relatives not only gives us the time to catch up but gives the boys — much to their delight– the opportunity to receive gifts either in cash or in kind. My boys received mostly cash from these visits.

Usually, I let them spend their Christmas money, but still under my supervision. Last December though, husband and I encouraged them to open a bank account

and start saving. Part of the money they deposited were their own savings from their school allowance. To encourage them all the more, husband promised the boys he will double the money they invested in the bank.

So a day before the bank closed for the holidays, we paid a visit to a bank and opened an account for each child. The boys were just too giddy counting their coins and paper bills in front of the bank manager. They even compared how much they have saved and recalled their most expensive, useful, and even wasteful purchases. They also laughed at each others’ signatures! 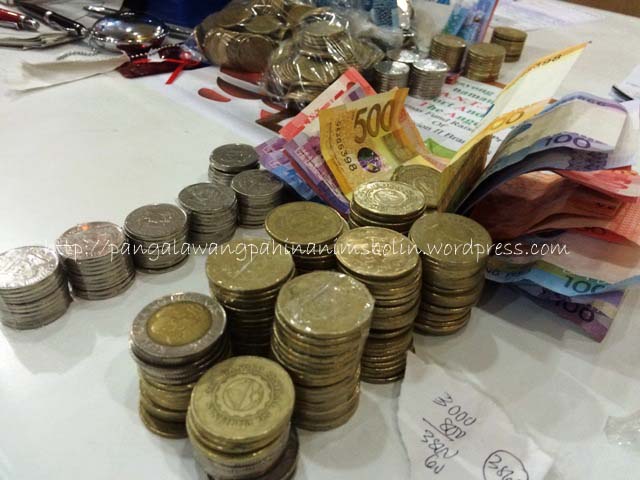 We spent about three hours inside the bank. After our transaction, the kind bank manager each gave the boys a pencil case. She even congratulated the boys for having their own bank accounts. But she asked this mother, “Why only now?”

WHEN IS THE RIGHT TIME TO TEACH THE KIDS ABOUT BANK SAVINGS?

In our family, I guess now is the right time. For the longest time, the boys go to school with baon already tucked inside their bags. They don’t need money

But this year, I see changes. They would drop coins into the jar. Then I would see paper bills. And just before Christmas, their jars are almost half full. Indeed now is the right time.

I would want my boys to grow up with the proper perspective on good financial habits, saving their money included. But I do not want to rush them and talk seriously about it.

Why? Because it was only last school year that they were given money as baon and I would want them to feel how to handle their own money. I remember Firstborn would buy ice cream instead of sandwich or rice meals at school. From his Christmas and birthday money, he would again buy ice cream. And I let him eat all the ice cream he could until such time comes he is tired of buying and eating them.

My boys are just kids so I let them be.  At their stage, they are impulsive buyers so let them enjoy their purchase and learn from it. Childhood is a special stage, and for the most part, it should be filled with fun.  Though I remind them about spending wisely and saving money once in a while, there is no point articulating every day the pros and cons of splurging.  They just are not ready for it.  That time.

Now, changes happen real fast.  Perhaps, because Firstborn had had too many ice creams in his life.  Or my two other boys completed their book collection from the Christmas money they have saved.  Or their parents buy them rewards and gifts that there’s nothing left to buy.

So again, when is the right time to teach kids about bank savings?

As a parent, you would know.  Their actions and spendings would tell you.  Sometimes they would even tell you, “Mama, I miss your Spaghetti.  Instead of giving me money, may you cook spaghetti?  I want that to be my baon to school tomorrow.”

So when the kids show excitement to open a bank account

act fast as well.  They might see in television commercials or read in magazines the latest Sphero, the BB8 app-enabled droid from Star Wars, and would want to have that instead.