I often fail to remember things.

I bought a Sienna contact lens, for instance, only to stir great commotion at home.  Bunso can’t help but look at me intently and when he can no longer keep to himself the big question, he asked, “mama, why are your eyes like a cat’s eyes?”  I grabbed a mirror and found that indeed, I have eyes like that of a cat.

Yes, I bought a pair of contact lens and I didn’t even bother look at the package.  As the sales staff handed to me the item, I put it inside my bag and left.   I learned the next day when I went back to the optical shop that what I normally buy is the Henna Brown color. 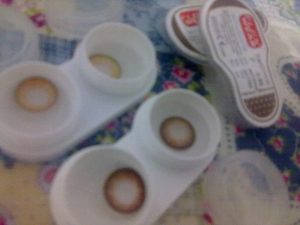 Was there a time you mixed up names?   I just did with my contact lens.  And with my boys.

Sometimes, I also struggle to find the right words.   Good thing my boys are all attentive and know how to read my hand gestures.  I need the boys to get the broom and dustpan, for instance, and I can’t seem to remember how to call those items.  I would then gesture to the boys that I need the thing I use to sweep the floor.  The boys would then say, “Ah, broom.  Do you need the dustpan as well, mama?”

There were times as well when I was not able to remember what I did yesterday or years before. For example, some office mates were gossiping about somebody.  They kept on referring to that somebody as “BF.”  Clueless, I asked.  “Why you keep calling him BF?  What does BF stands for?”  “BF” is “body fit,” they would say.  I told them that it’s bad to call names.  A friend told me that it was I who coined “BF.”  That I can’t remember anymore.

I haven’t consulted a doctor yet.  I believe I only have occasional memory lapses — like forgetting where I put my eyeglasses.  I am not quite sure how much of this forgetfulness implies a greater risk of me developing a full-blown Alzheimer’s.