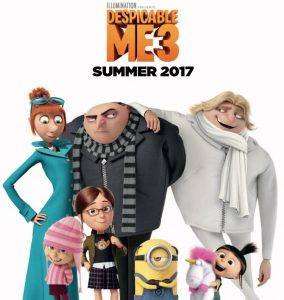 The 90-minute flick taught me about the beauty of a family – having a brother in particular. For years, I thought I was an only child. Later in my life, I learned that my father is still alive with a family but not us. I have three siblings, the oldest about a year younger than I. We do not communicate. We do not see each other. I only learn what’s new about them through Facebook. And they must also learn what’s going on with my life through social media.

I was surprised when one day, my sister messaged me. She is in need of money. I lent her the amount she needed. It took her many months before she could return the full amount. After that, no communication again.

Years after, I got a message from her again. She wished to borrow money again. She issued a check as payment. And after that, no communication again.

What am I driving at?

Despicable Me 3 taught me the value of having a sister

I lent her the money she needed, perhaps because I would want to be a sister to her. Sadly though, in those two instances, we never got the chance to level up our relationship. But what perhaps we were able to establish is the fact that in times of need, she considers me as someone reliable to be of service. I would like to assume it’s the same way to me when I run to her for help.

Seeing Dru and Gru excited to finally spend time together is way far to happen to us. I love how the twins instantly clicked. I don’t know if such story happens in real life but it just wasn’t the case between my sister and me.  But what I am confident is that we were able to acknowledge each other as our father’s daughters.