My Monday was awful.  I felt overworked and unappreciated. This mother would want to complain but remained quiet and gloomy. She wished for her husband to be understanding and show a little consideration, pretty much like the story of the Belly and the Members.

The Belly and the Members 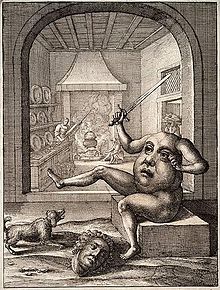 One fine day it occurred to the Members of the Body that they were doing all the work and the Belly was having all the food.

So they held a meeting, and after a long discussion, decided to strike work till the Belly consented to take its proper share of the work.

So for a day or two, the Hands refused to take the food, the Mouth refused to receive it, and the Teeth had no work to do.

But after a day or two the Members began to find that they themselves were not in a very active condition:

the Hands could hardly move, and the Mouth was all parched and dry, while the Legs were unable to support the rest.

So thus they found that even the Belly in its dull quiet way was doing necessary work for the Body, and that all must work together or the Body will go to pieces

The mother and her family

One Monday, the mother of the house just didn’t feel well.  She stayed in her bed, not wanting to move.

She slept for some more hours and when she woke up realized it was nearing lunch time.  The boys haven’t eaten breakfast yet.  The husband, on the other hand, remained glued to his computer screen.

She took a shower and drank water.  She scavenged for food and returned to bed.

Her concerned son went to his grandmother’s house and got a few leftovers.  He also brought home three packs of pancit canton and three cans of sausages.  She heard the boys preparing meal downstairs and her Big Bunso even offered her food.

Come dinner and she smelled of adobo.  The husband must have come to his senses that his wife will not cook food.  He cooked adobo for dinner.

Moral of the story

As in the body, so in the state, each member in his proper sphere must work for the common good.

There were times I just feel exhausted and unappreciated.  And one of those days was that Monday.

I religiously cook breakfast, lunch, and dinner for the boys.  I even prepare merienda.  Sometimes, I would want to have that extra sleep but because I know the boys would soon look for food, I work in the kitchen early.

They say husband and wife support each other.  A thoughtful husband would feel the needs of his wife.  I just got so sad my husband hasn’t realized that his eight-month pregnant wife also needs a break from cooking.  The problem though was I can’t relay that to him.  I want him to realize it on his own.

Seemed though the husband realized what his wife wanted.  He cooked adobo for dinner but didn’t bother to bring some to his hungry wife upstairs.  At least, though, the boys had dinner and that made this mother somehow happy.