One scorching weekend, the boys, with their parents, traveled to Punta de Uian to go swimming and to somehow experience an escape from the usual four walls of their small house.  For the husband, it was more of escaping the rat race and 14 while strengthening his bond with office mates.  For this mother, it was like nourishing and recharging the soul after a complete curettage and loss of her dearest baby.  She was there as well to conduct training for engineers and architects. 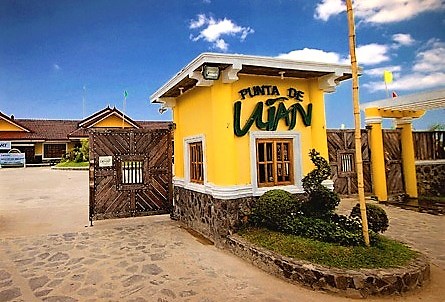 Cradled in Pundaquit, San Antonio Zambales, Punta de Uian is a secluded resort paradise where one may just lay on his back, watch the sea and the birds, and get lost for a while.

Only 45 minutes from the Subic Bay Freeport Zone, Punta de Uian is right across the sea and has its fleet of motorized boats to take you island hopping.   Jetski and banana boat are likewise available for rent.

Our family wasn’t able to explore the resort given its 19-hectare land size with another 20-hectare expansion in the making.  Also, the kids were all busy and contented with swimming and playing.  The husband was occupied with his wine after the team building activities while I busied myself looking after the boys swim and play.

Though only a brief stay, our family had a blast.  The boys enjoyed the sun and the water very much.  And almost everything was shouldered by husband’s company.  Our family conducted a team building workshop and a planning session for husband’s company in exchange for the room accommodation, food, and transportation going to and from the resort. 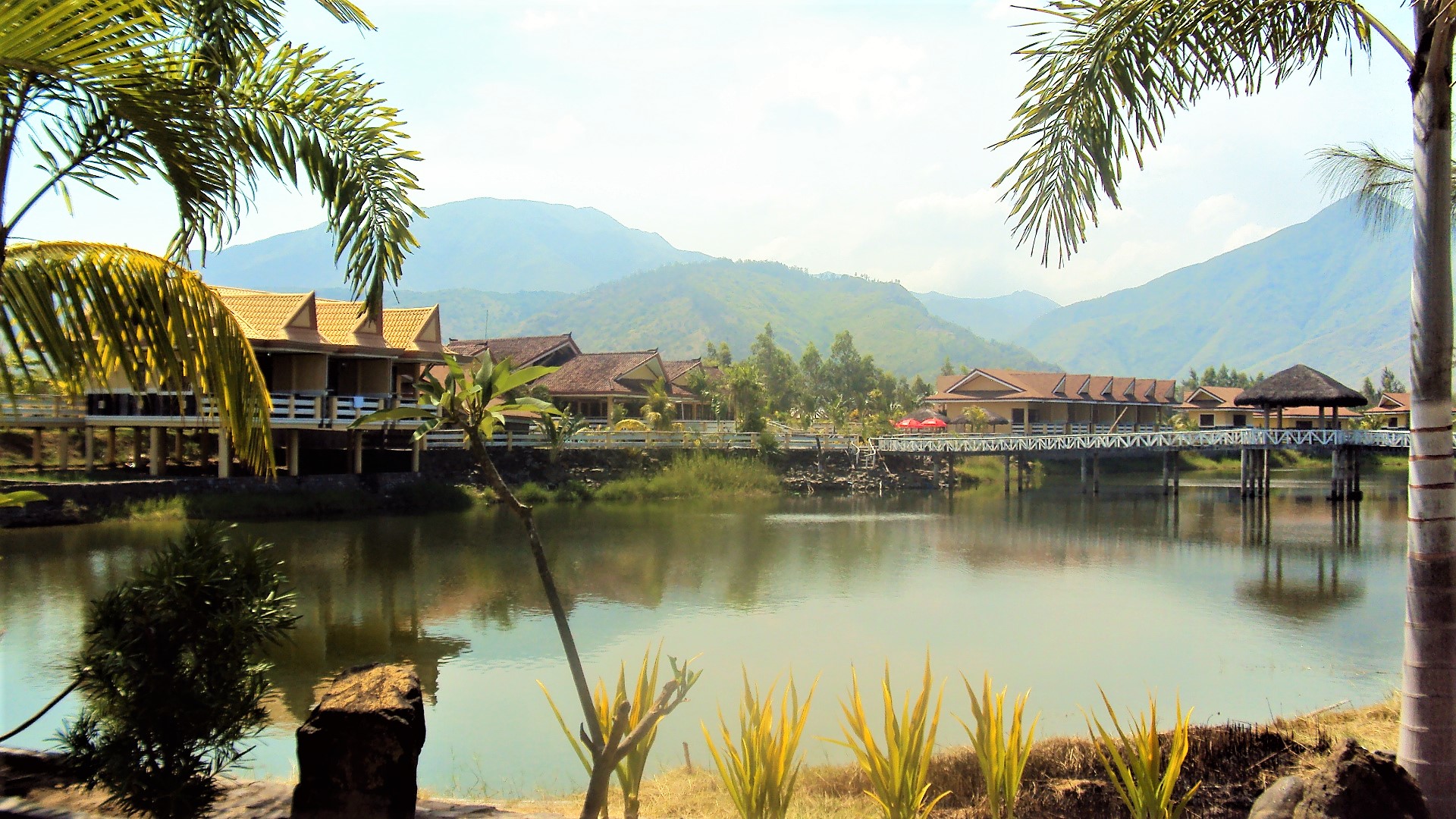 Punta de Uian’s hotel rooms have individual balconies where one could have a panoramic view of the mountains and the water.  The resort likewise has suites, duplex and family villas to accommodate a bigger number of guests.  The room assigned to us was a duplex complete with two bedrooms, two toilet and baths, a living and a dining room plus a kitchen.    The room has an excellent view of the beach front giving the kids extra push to go out and play outside. 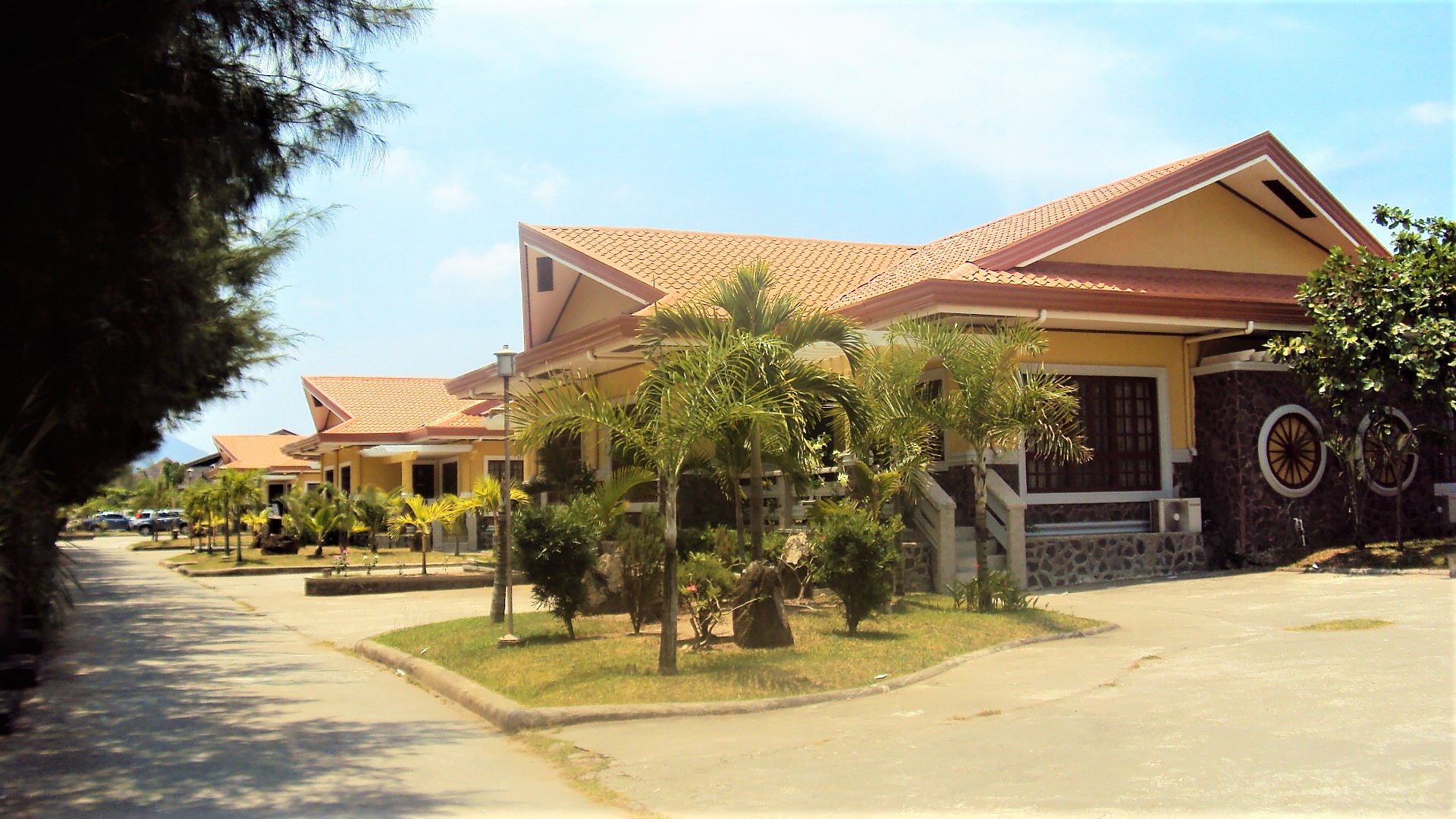 A row of duplexes within the resort, spacious enough for big families or groups. 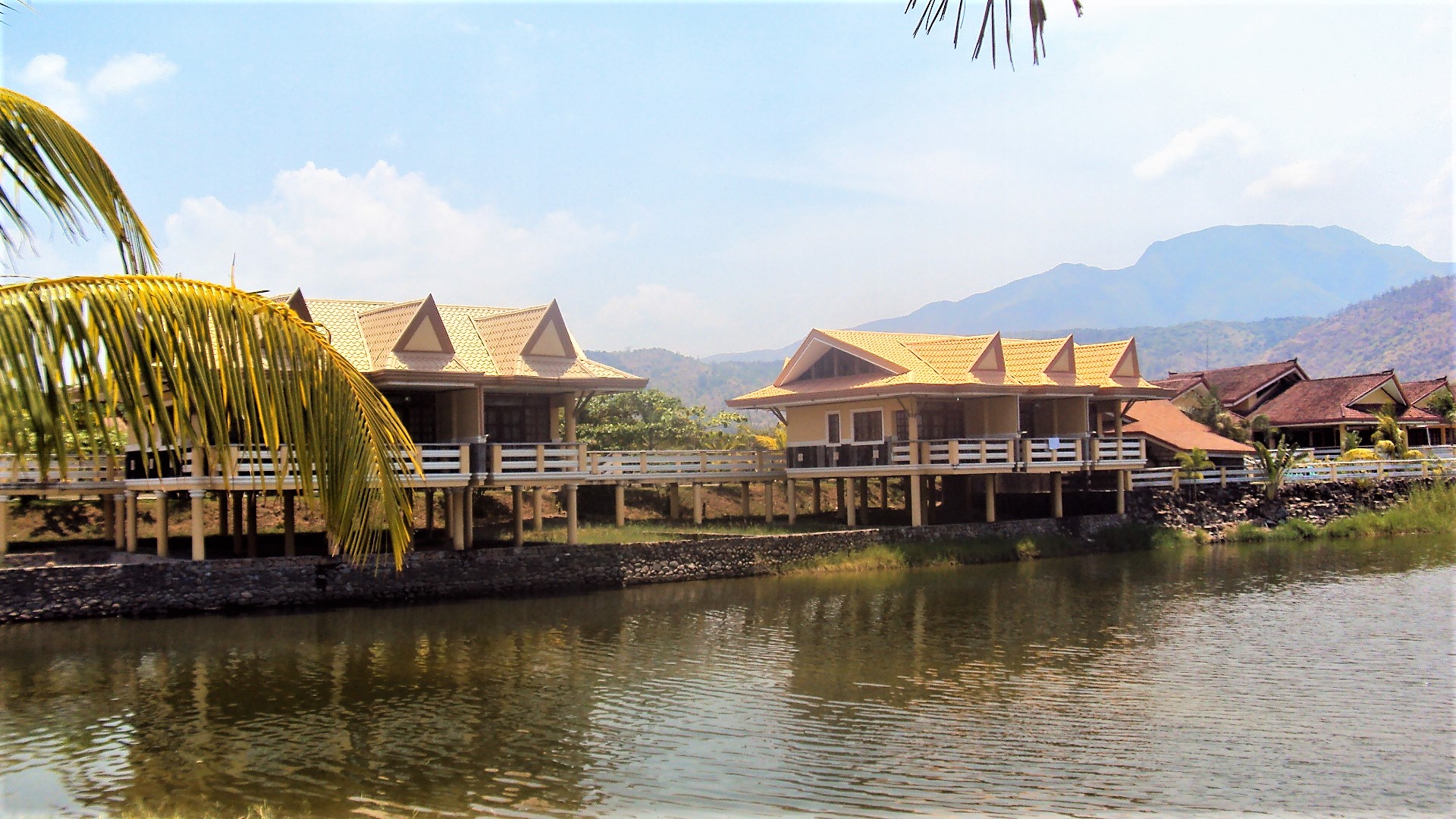 Rooms just fronting the beach typically catering to those who would want to experience breathtaking views of the vista around and fresh sea breezes. 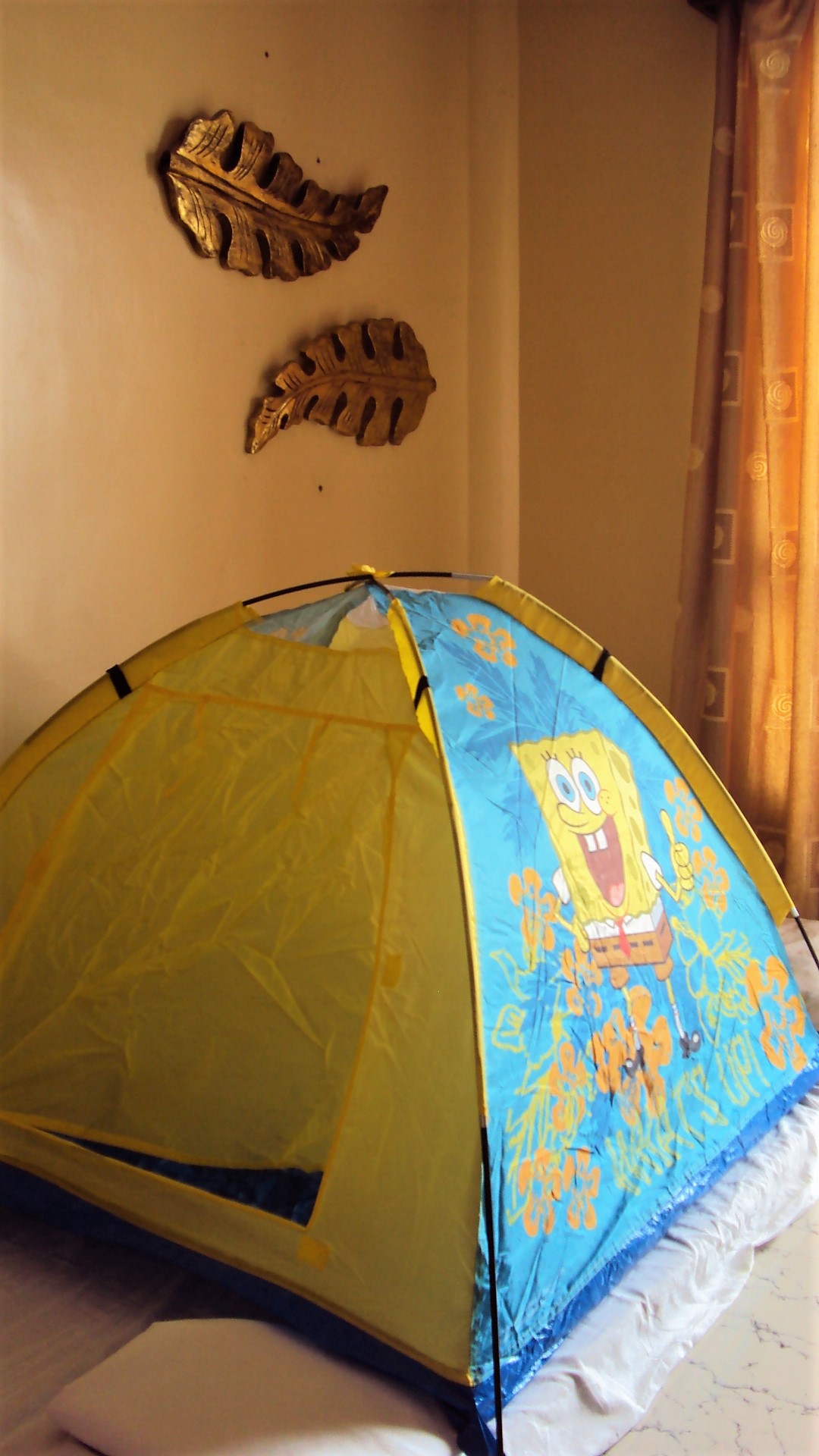 Yes, we brought with us the boys’ tent and they indeed sleep inside their tent which is inside the room.

Albeit small, the function room within the main lounge could accommodate 45 pax.  Punta de Uian has a bigger open-air dining hall where groups of as much as 60 pax could have their banquet-style meal.   Both have log cabin furnishing to create a more homey and relaxing ambiance somehow. 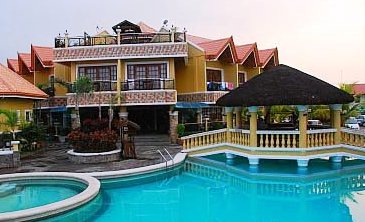 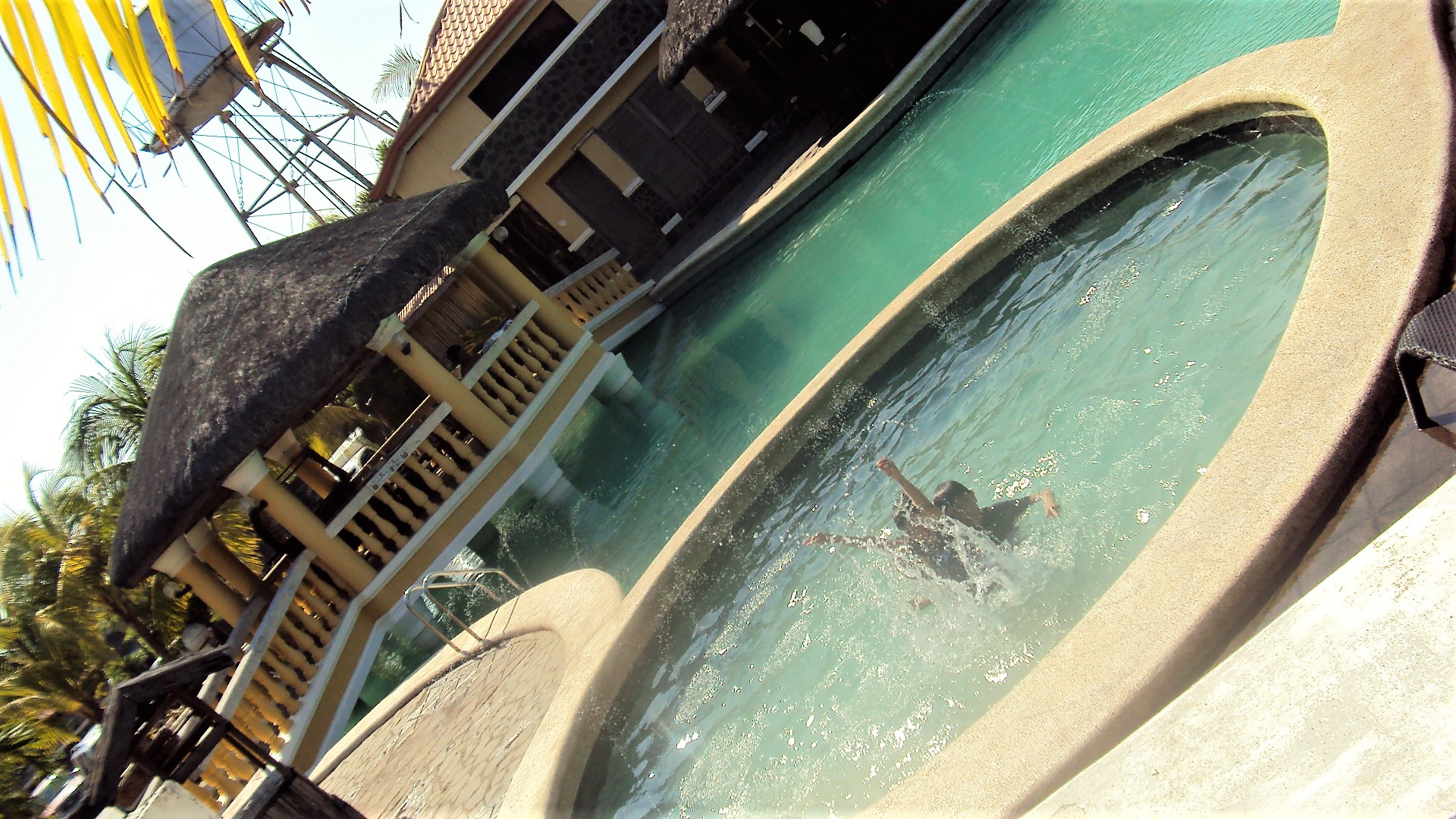 The boys doing some synchronized swimming. The pool was theirs to enjoy.

A variety of water sports one may try while within the resort are banana boat, jet ski,  kayaking, scuba diving, snorkeling, and surfing.  And because it nestled within the fine beaches of Zambales, Punta de Uian offers magnificent views of the ocean and nearby lands -Capones Island and Anawangin Cove.

The boys surely had fun.  Even the parents had a real nice break from work.  Their overnight stay was truly relaxing and rewarding — though the food wasn’t the finest — and a definite second trip may be planned.  But not anytime too soon.

This family asked around.  Why Punta de Uian for a name?   I learned that Uian is the name of the Filipino owner’s only daughter.  And the owner, the source revealed, won the lottery in the United States and used his winnings for the construction of the resort. 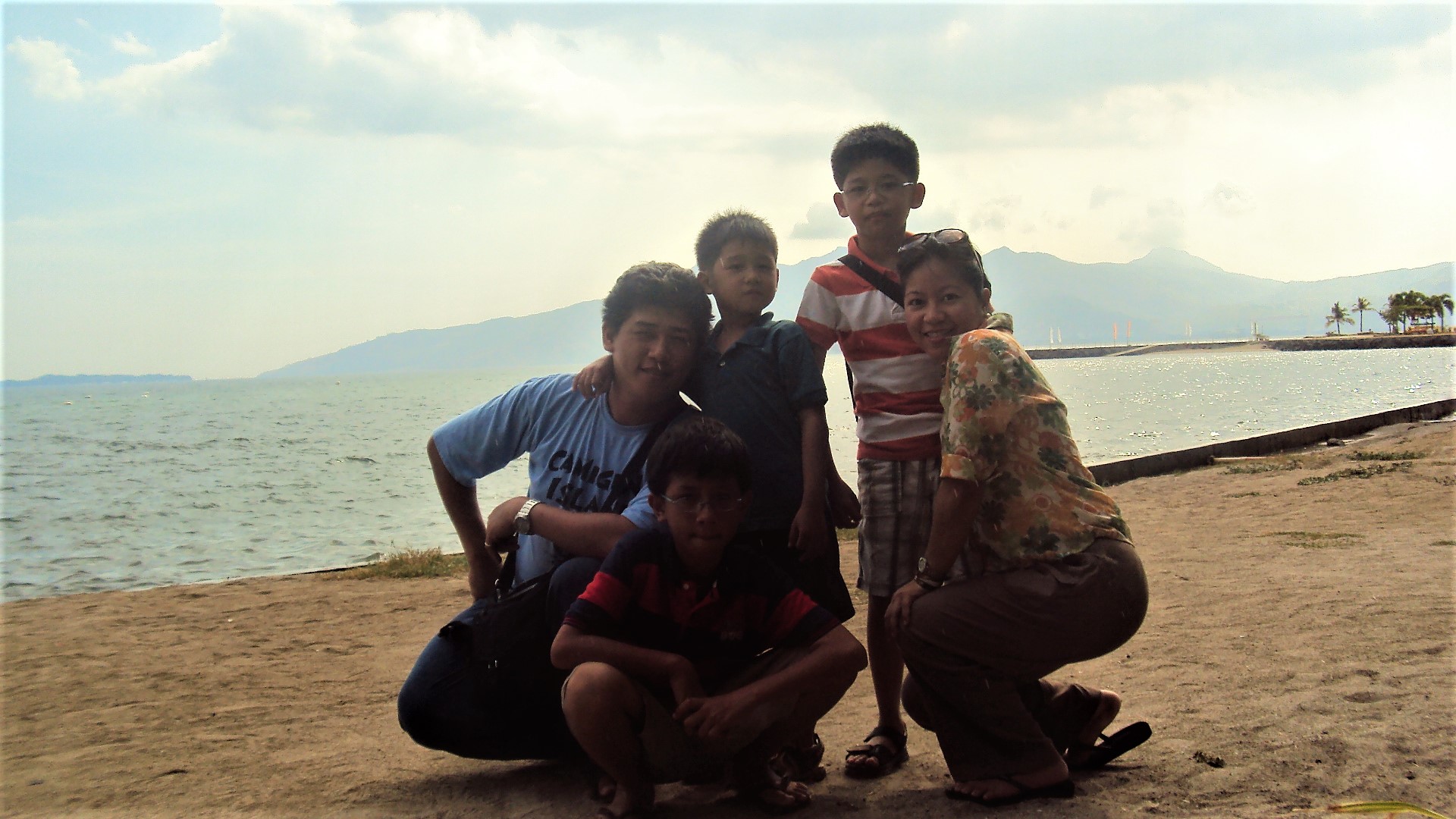 All smiles and darker after our two-day stay at Punta de Uian.

For reservation, one may email at elsa.puntadeuian@gmail.com or check Momi Berlin’s directory
Punta de Uian Website | Facebook
* Momi Berlin and her family went to Punta de Uian last April 2013.  And this Holiday break, we plan to travel North to escape the city and breathe in some fresh air.  We are considering Punta de Uian.