14 years ago, I was pregnant with you. Your mom feared that you might be abnormal. I took an antibiotic for my Urinary Tract Infection then, and I was not aware you were inside me.  I religiously prayed to our dear Lord that you be healthy. And God listened to my prayers. Aside from giving us a healthy boy, he even showered you with intelligence, patience, and kindness.

I remember those moments when you invented your toys and even relayed to your mom how your teacher chose you to represent your class and even the school in competitions.  You made us proud parents.  And you continuously make us proud.

Wikipedia says that a catapult is a device used to throw or hurl a projectile at a great distance.  This is without the aid of explosive devices—particularly various types of ancient and medieval siege engines.

The best example of a catapult is used in an Angry Birds game.  It is the slingshot used to attack the pigs even of greater distance.   The literature says that a catapult has been used since ancient times.  And it is proven to be one of the most efficient resources during warfare.

And so, with nothing much to do in the house (the boys might have been too bored playing online games and PS2), Firstborn made a catapult model.

For his model, he made use of popsicle sticks and rolled paper as the body of the sling; a soft drink cap to hold the “bala”; scotch tape to hold the body together; and a rubber band to pull and release the cap.

Second son crumpled a few paper and dyed them to use as “bala” for the catapult.

Big Bunso joined in too and used his Uno Stacko bricks as the target.

And that’s what the boys did for the whole Sunday.  They never get tired.

Googled a catapult picture and this was what I got — not so different from my Firstborn.  Excellent, Firstborn!

It seems that we need not buy the boys new toys for they MAKE and INVENT their toys and games. After the fruitful and well-appreciated catapult, Firstborn again designed a new toy — a siege ram.

Husband explained to me that Firstborn’s siege ram aims to break open walls or doors. Simple siege ram maybe just a large, heavy log carried by several people to force against a wall.

What Firstborn designed was a siege ram with canopy where the log would swing from suspensory chains or ropes. 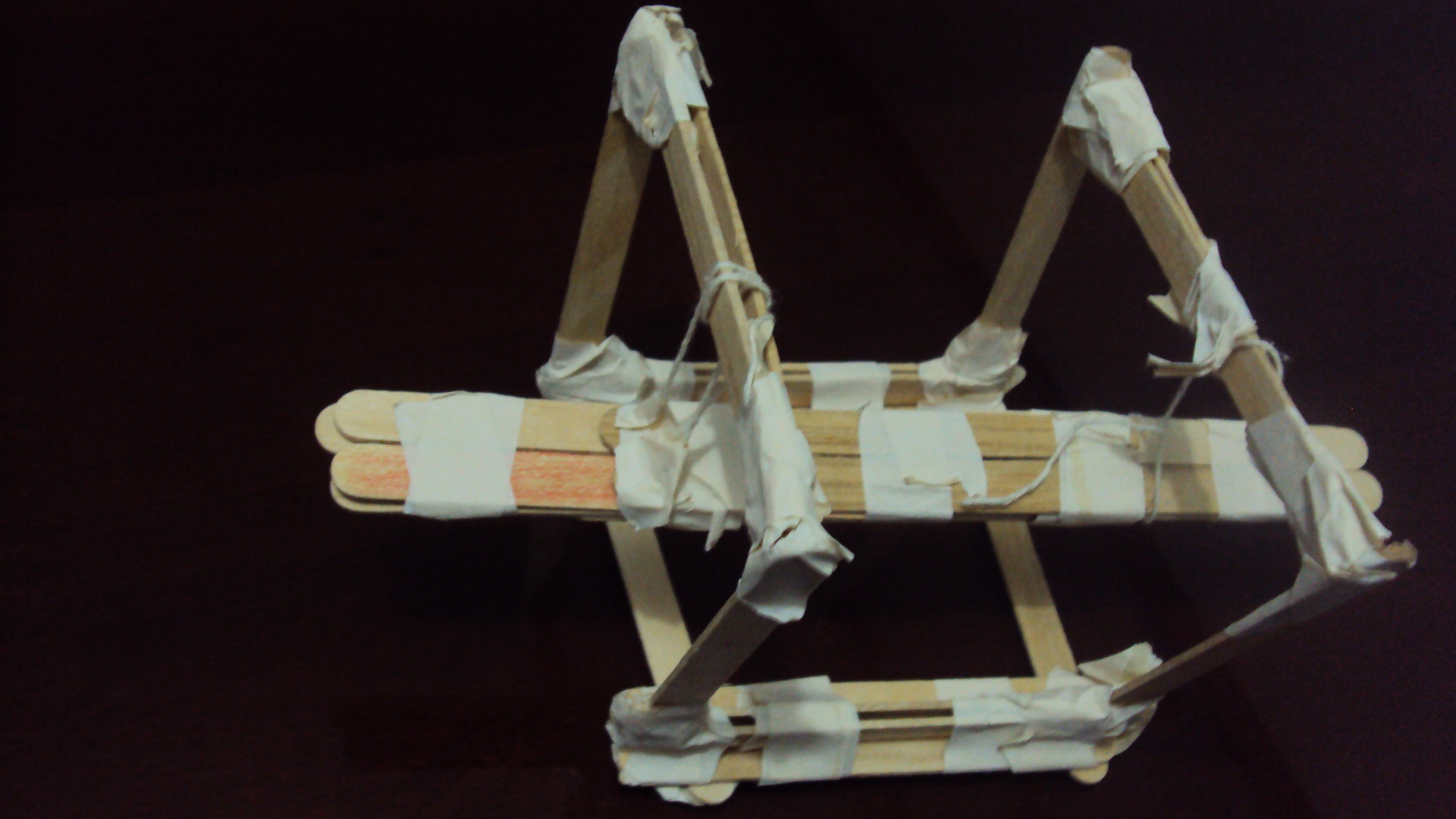 Firstborn’s siege ram, a quite interesting invention at age 11.

For the materials, Firstborn only used popsicle sticks, masking tape, and string.

Now that I need not buy the boys new toys, I think we should never run out of string, masking tapes, popsicle sticks, and construction paper.

Young Inventor of the Wind-powered car

This is Firstborn’s Science experiment.  With the help of his father, he assembled a Tamiya car and installed a propeller to use the wind, not an engine, to make the vehicle move. 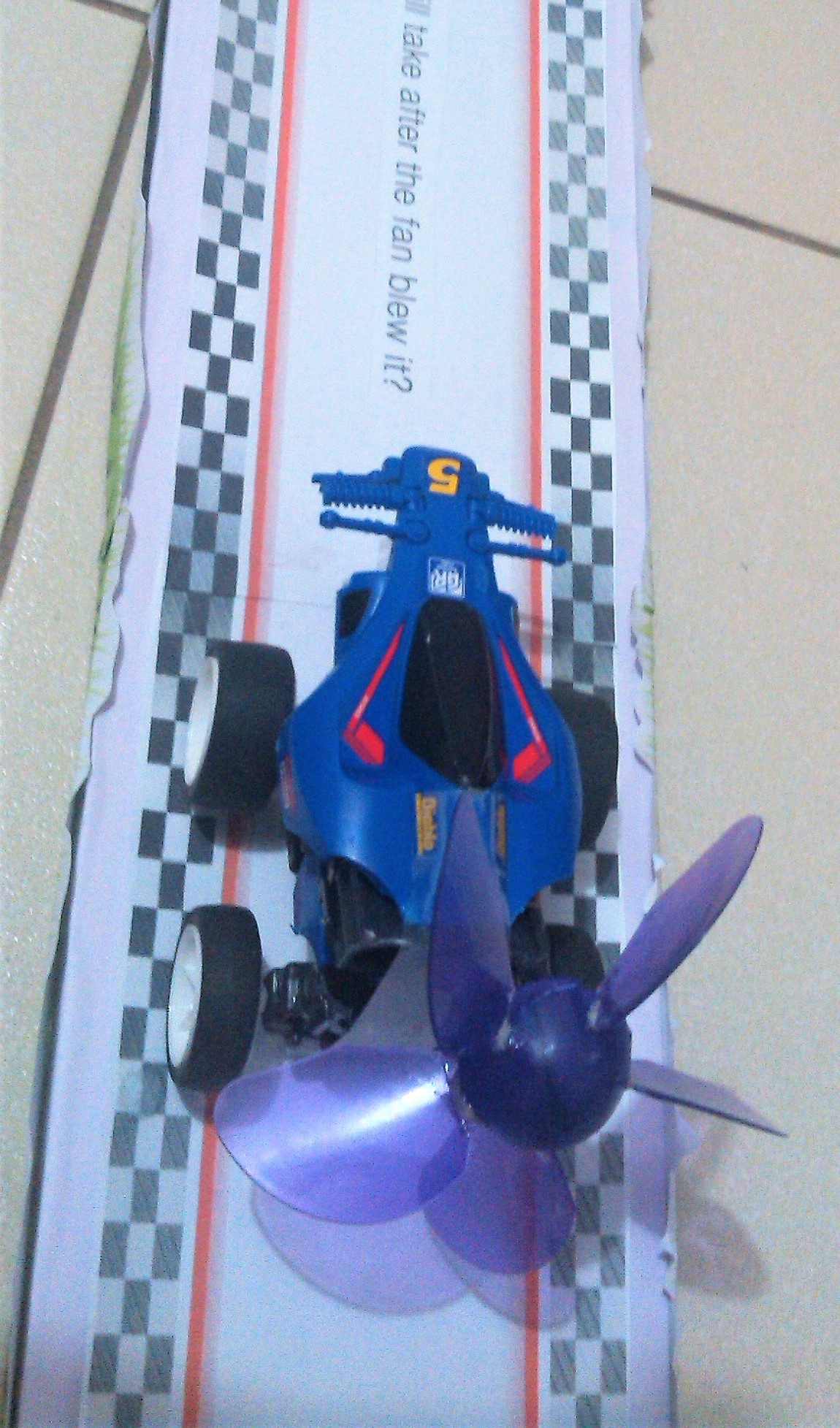 The catch though is, instead of the vehicle running against the wind, the car moves toward the wind.  The car’s propeller does not push the vehicle but pulls it and turns the wheel to go in the direction of the wind.  Kind of interesting, hmm.

As Firstborn explains it, there are many wind-powered vehicles.  Though his car uses wind energy as an external power source, it’s the direction of the car that makes his experiment unique.

Firstborn’s wind-powered car as his class’ representative at the Science School Fair.

And I may say it’s quite impressive!

By the way, his experiment was his section’s entry for the school’s Science Fair.

Aside from inventing toys, our Firstborn also shows interest in web design and chess among other things.

Wikipedia says web design encompasses many different disciplines in the production and maintenance of websites.   And my 12-year old boy is about to compete in the internet page design contest at their school.   Another cool experience there, my young man!  Break a leg!

Firstborn represented his class in the Web Page Design Contest and emerged as one of the finalists.

Buying that chess box at the Little China Town in Singapore months ago wasn’t a bad idea after all. 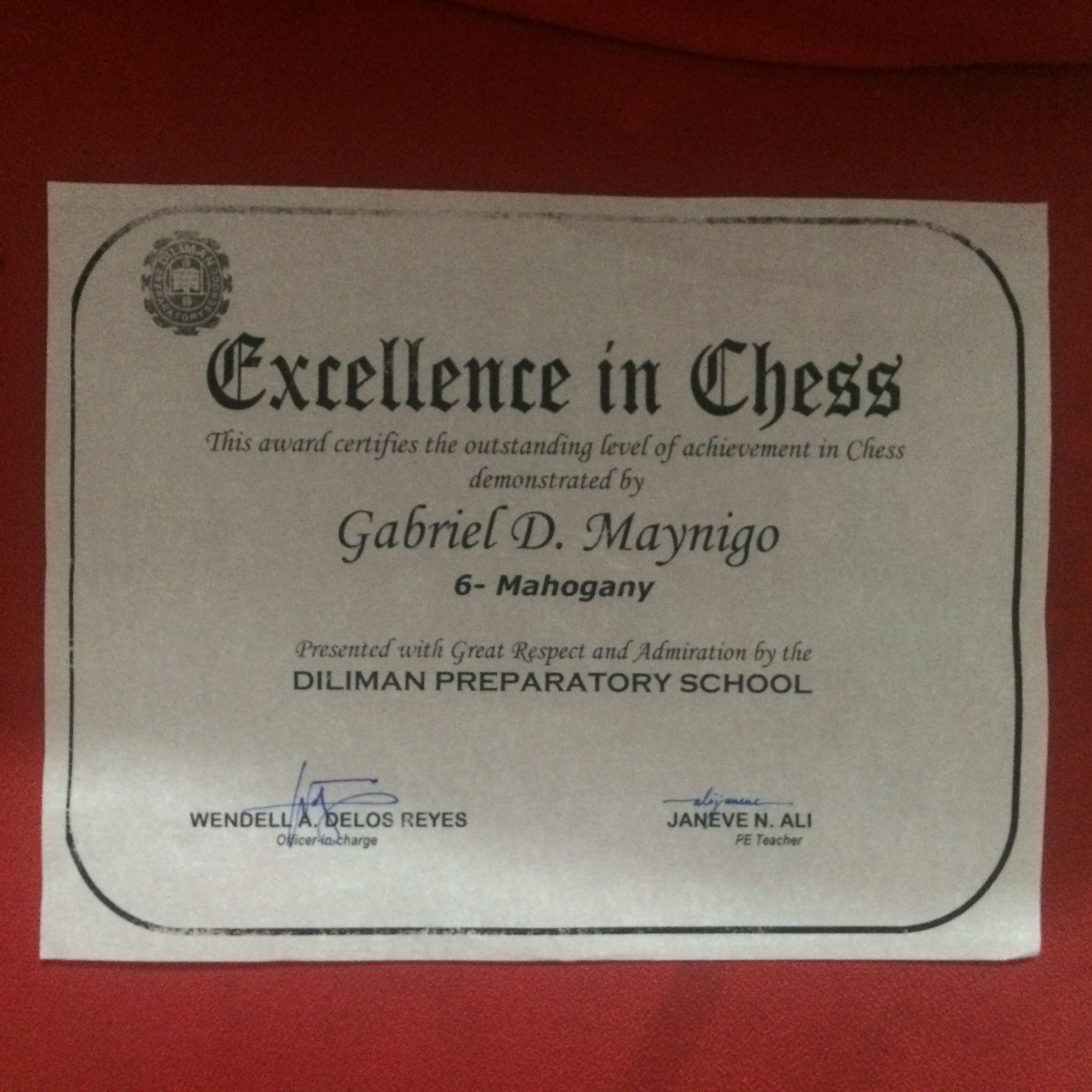 Firstborn competed at his school’s Chess Tournament and was recognized for his outstanding achievement in the sports.

It was Friday evening, and I was exhausted and sleepy.  It wasn’t the traffic that drained my energy but perhaps the whole five days of work.  I got home and saw a small precious box on top of our dining table.  It was obviously a box for a medal.

Firstborn competed in their school’s Mathematics and Science Challenge 2015.  He was announced champion later that afternoon.

Congratulations, Firstborn.  My dark face that Friday night suddenly lightened up.  Thank you for showing a keen interest in Science and Mathematics. 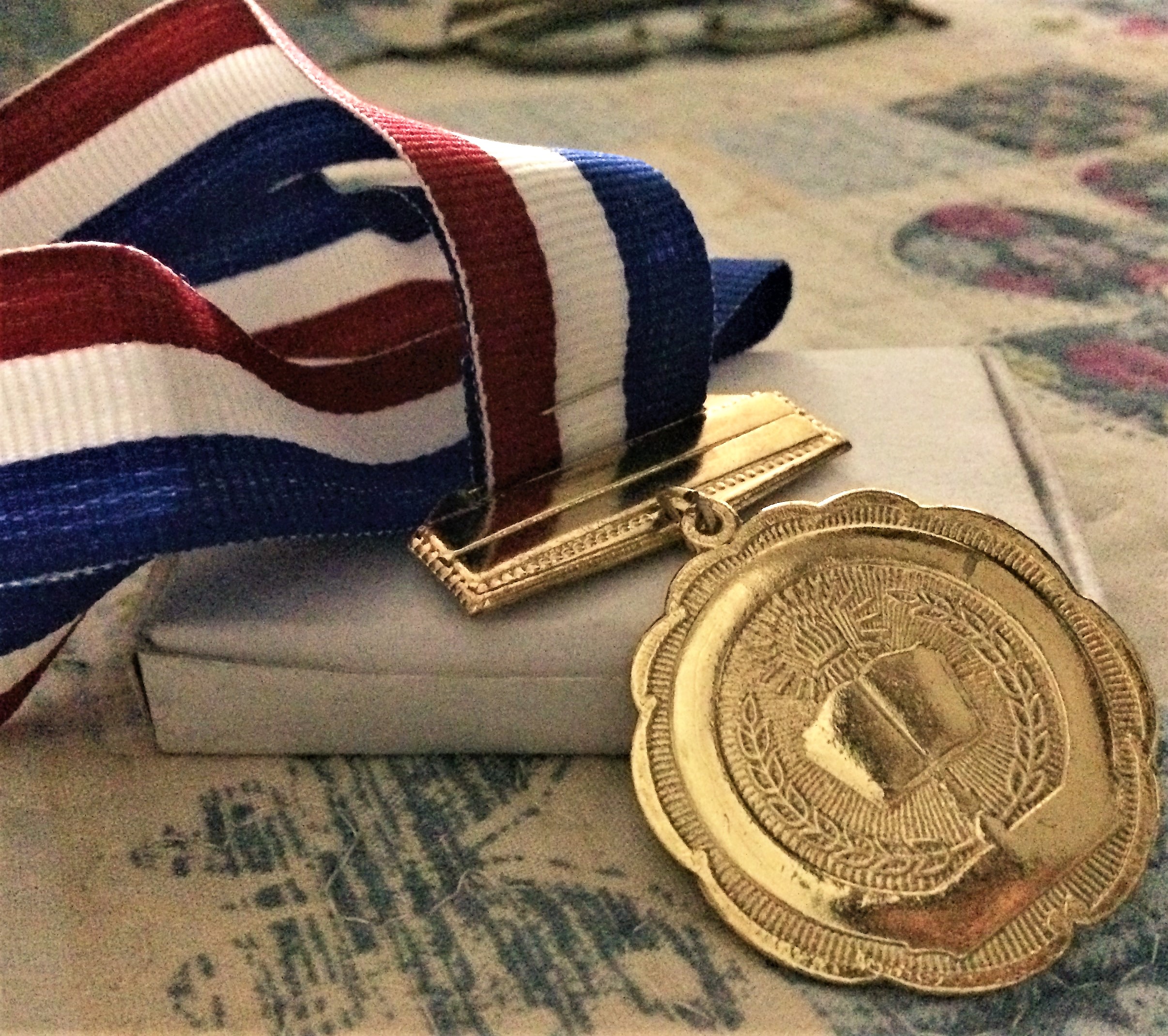 Firstborn competed in their school’s Mathematics and Science Challenge 2015 and he brought home the Gold Medal.

The will to win, the desire to succeed, the urge to reach your full potential… these are the keys that will unlock the door to personal excellence.

48 student contestants.  16 teams.  two grade six and one grade 5 in each team.  All competed for the Philippine Institute of Quezon City (PIQC) 1st Interschool MathSci Challenge 2014. 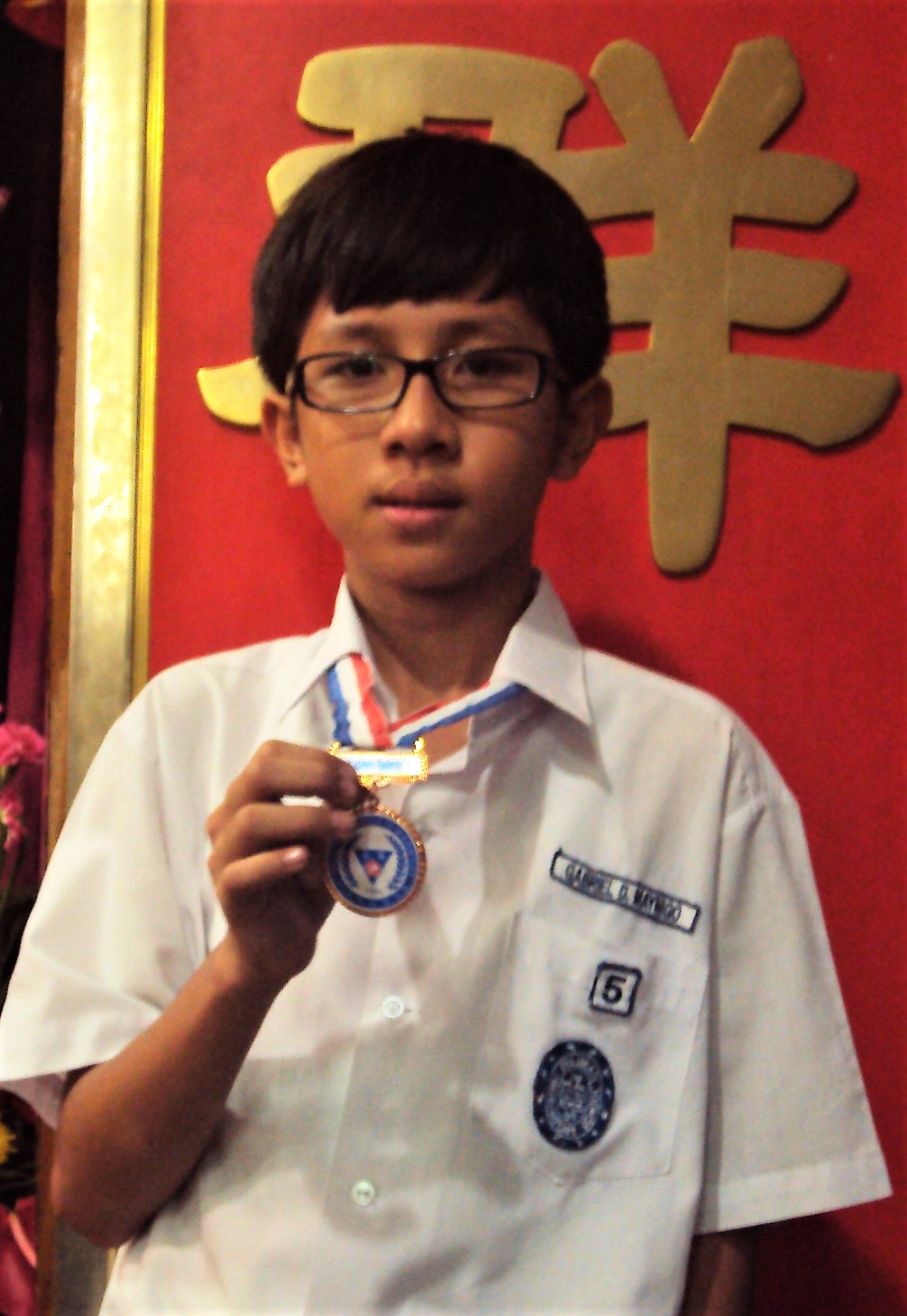 We stayed at the PIQC the whole Saturday.  The contest was composed of three rounds — the elimination, semi-final and final.

The elimination was in the form of a written exam consisting of Math and Science questions.   Individual scores of each team member were accumulated to decide which group made it to the semi-final.  Luckily, Firstborn did great in Science thus qualified for the semi-final with his two other teammates.  The elimination round started at  9:30 am.

Top ten teams in the elimination qualified for the semi-final round which began at 1:30 pm.  On the semi-final,  a quiz master read the questions, and a representative of each team wrote the answers on paper provided by the organizer.  The round consisted of two parts– brains-volt-in and dice-it-challenge.

The top five teams in the semi-final round based on the team scores qualified for the final round.  Semi-final round scores were carried over to the finals.   On the last round, a question on either Math or Science was directed to one team and the team had the chance to pass or answer.  If the team was unable to answer correctly, other teams were given an opportunity to steal for points.   However, when answered incorrectly, points were deducted.

It was in the final round that I realize Firstborn’s dominant character — he is one happily unworried guy.  He would dare respond to a challenge even if he lost points for every incorrect answer.  It was his strategy– he told me — because his group was way behind the leading team and only by taking the risk to respond to the problem would give them a chance to improve their team score.

I am so proud of you, First-born!  Keep it up, and I hope that the PIQC 1st Interschool MathSci Challenge 2014 brought many learning and fun memories.