MOMI MUSINGS/ When I grow up

NOTE:  A compilation of “When I grow up, I would like to be a…” by my three boys through the years (pardon the quality of the photos; super old collections).

When I grow up on DOCTOR at 4yo; BUS CONDUCTRESS at 6yo

Big house.  Firstborn approached me and related his evening conversation with his youngest brother.

Son:  Mama, Bunso  told me he wanted  to be a doctor when he grows up.

I remember my dream.  I used to dream of becoming a bus conductress.  She can stand still even when the bus is moving.  And that was my ambition at age six.

When I grow up on A STREET FIGHTER at 7yo

Second son’s teacher approached me and showed to me my son’s writing composition.  The graduating preparatory students were asked “what do you want to be when you grow up?” for their  yearbook.

“I want to be a street fighter,” was his proud answer.

When I grow up on ENGINEER at 5y0

“I want to be a civil engineer when I am a big boy na, mama. And I will build this house for you,” says my five-year-old loving Bunso.

When I grow up on ENGINEER at age 5 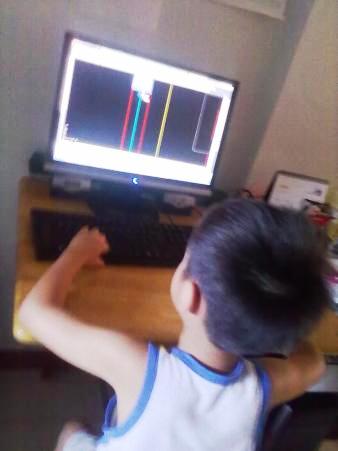 THE YOUNGEST AUTOCAD ENGINEER at age 6.

He is our Bunso and he often watches his papa work on the computer.  From time to time, he would ask his father what the color signifies or what the different thickness of steel implies.

He is one curious kid.

Last Friday, as his father excused himself for a few minutes’ rest, Bunso asked his father what he will do next.  “I need to erase all the doors and windows from the file,”  the father said matter-of-factly.

This is our Bunso trying to finish his papa’s work.  And he  did it perfectly.  As in!

When I grow up on CHANGE CAREER PATH at 7yo

When I grow up in change careers at age 7

Today, I learned that my Bunso doesn’t what to be a doctor anymore.  He wants to be an engineer.

On his book, he describes that as an engineer he should have power tools and construction equipment to finish his project.

When I grow up on TEACHER OR ENGINEER?

When I grow up on Teacher or Engineer

The second son had take-home test papers for checking.  He told me his teacher requested him to check his classmates’ Science quiz.

Bunso:  Huh, kuya Second son, you are like a teacher.  Checking papers!

Second son:  Yes, but I still want to be an engineer.

WHEN I GROW UP

When I grow up on BEING HAPPY.

Husband was fixing our electric fan.  Bunso was beside him helping.   After a few minutes, the father asked his son, “Do you want to be an engineer someday just like your papa?”

“I just want to be happy when I get old,” the nine-year-old boy added.

Then I remember what John Lennon’s ambition in life was.

Children have the funniest and even the most profound yet most sincere sayings.  I just thank God for blessing me with such amazing boys.