Never thought I’ve documented all these.  Or maybe I got three kids at the small house to make me happy.  I bet there were still so many funny moments I’ve recorded and misplaced.  Again reasons that make this momi laughs –

Second son:  Have you played tetris?  How about car town?  I sent you a gift.

Second son:  How come the other person from your office  plays chess when I went there before?

The boys know their mother very well.  She is such a clean freak and would always ask her kids to keep everything clean and neat.

So one Friday evening as this mother sat on the sofa, she noticed the sofa near her—

It has a pen marking on it.  And the pen marking was painstakingly rubbed off with a pencil eraser.

This mother can’t get mad.  She really appreciated the effort.

dinner chat with the boys

Bunso:  Mama, all the matatalinong (intelligent/ excels academically) students in our class got a wrong answer in the G clef question of teacher.

Momi:  You got it right, though, I suppose?

Bunso: No, I got it wrong. You see, as I have told you, all the matatalinong students in our class were wrong.

Sunday evening, on our way to attend mass  (inside cab)

Bunso:  Mama, you want a free ride from this taxi?

Momi:  Sounds interesting?  How can we have a free ride?

Bunso:  Mama, may I just take one bottle of all my medicine so I will no longer take a little dose everyday?

MOMI LAUGHS ON Three sets for the three little boys, everyday after breakfast.

I guess my second son is keeping something from me.

By the way, he asks for a new ballpen.  He claims his ballpen isn’t writing.  Hmmm.

I went home from work

And I found this – a few broken pieces of our cookie jar.  I looked closer. 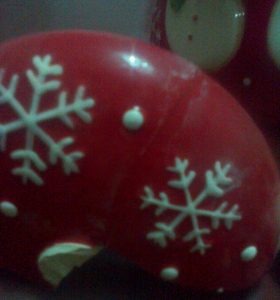 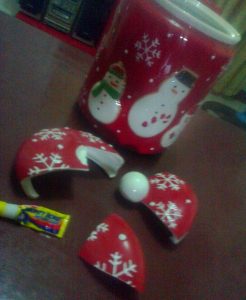 Someone tried to fix the lid with obvious traces of the glue line.  It made me smile.

MOMI LAUGHS ON DO NOT DISTURB, I’M BUSY

Today is Saturday  and everyone is busy minding his own business

Bunso is doing a school assignment and making it a point that he puts his full concentration in whatever he is doing.  Good boy!

Second son is on an errand for his mother and is filling up water jugs.  Thank you, son.

And their mama is busy checking her email. (quick check only, guilty)

Bunso checks on his brother.

Second son says something but bunso’s abrupt reply stuns me.