I thought my “Anecdotes from Tot” series would come to end.  I still have a handful of scratch paper and some writings saved on my USB.  Please bear with me.  And I promise you this part 11 is truly funny, or perhaps I am their mom that’s why I find all the  hirits worthy of my laugh and time.

I came from work.  I was too tired and hungry that I told the kids that mama will just eat first before we study and answer the school assignments.

Second son came to me and handed a folded paper.  I opened the paper and saw a tooth inside. Written on the paper was – 6 January 2011, English class.

Second son related to me that he was rocking his chair during English class and then he fell from his seat.  His tooth hit the floor and it fell off his mouth.

He later went to the school clinic for a first aid treatment.  He kept his tooth inside his chest pocket and when he got home rolled it inside a paper.

The boys are enjoying the Nerf toy mother gave them last Christmas.  Husband and I even joined the boys’ game.

One morning, though, I found this-

I was indeed dumbfounded by second son’s photographic memory.

I helped him review for his third quarter exam scheduled next week.  We studied computer and I was in total awe– most likely the same feeling as that of stargazers in awe when total eclipse arcs across the sky– when he told me he knows the exact position of the letters on the computer keyboard.

Yes, you read it right!  My seven-year-old boy knows the location of all the keys of the keyboard.  He just happened to memorize the keys when he plays online games. 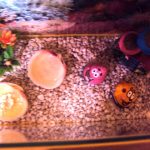 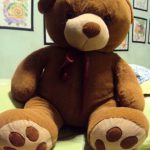 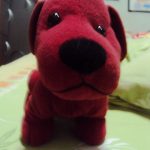 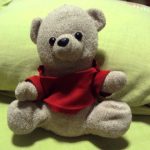 This is Dumby, and I named him that way. Husband gave Dumby to me two years ago during Bunso’s third birthday.

Instead of sleeping with pillows below my head, I hug them.  I was used to hugging a hotdog pillow.  My long pillow though was brutally attacked by bed mites thus, we threw it long ago.

Now that I have kids of my own and the bed is getting smaller for us, Dumby is my new hug bear.  No need to add more pillows to save on space.

Snappy bear is Second son’s bed mate.  They share a pillow and blanket.  Second son even kisses or smells Snappy bear before sleeping.  He is a Kris Kringle gift to husband by a dear friend from the university he once worked for.  Snappy bear is now six years old.

I have no picture of Puffie.  it is firstborn’s pillow.  He hugs Puffie during his sleep.  Puffie needs regular washing because he sometimes emits a foul-smelling odor that is quite embarrassing.  Firstborn bites the pillow’s edges so one could imagine that Puffie now is not in good condition.  Despite that, though, Firstborn doesn’t want to buy a new one.  He loves Puffie very much.  I got Puffie a decade ago when I joined Dakki networking.  The name Puffie though came from him.

Bunso christened his bed mate Clifford Bantay because the small red dog watches over him while he sleeps.  A gift from husband years ago, Clifford Bantay displays a rather malformed head.  Despite the defect, the dog is still charming.  And just like Second son, Bunso kisses and cuddles his doggie.

Given the names of our bedmate, I then realized that Firstborn, Second son and I were struck by the -y/-ie naming disease.  By good fortune, Bunso was spared.

By the way, we have two hermit crabs, Spongie and Petty. :d

Last night, husband and Bunso went to our trusted drugstore three blocks away from the small house.  They will buy Fusidic acid, an eye cream for Bunso’s eye infection.

I was changing from office clothes to pambahay when I heard Bunso wail.  His legs have bruises and scratches.

Husband told this worried mother that Bunso fell into a hole on their way back home.   Some irresponsible contractors left the unfinished hole uncovered.  These workers made a long narrow hole (parang kanal) for a water pipe they are yet to install.

I washed Bunso’s feet and in between sobs, he mentioned to me, “I wish I am a big boy already so I will have big feet and big steps.”

Our neighbor is a barangay staff and we mentioned to her  the accident.  She reported the same to our barangay  chairman.  And in turn, our chairman demanded an immediate action.  The contractors covered the long narrow hole with a piece of plywood. Thank you then.

Four-year-old son came from school.  I have just finished cooking supper.  Bunso smiled mischievously and said “I know what our dinner will be.  It’s squash.”  He must be pertaining to ginataang squash with string beans and ground pork, his Kuya Second son’s favorite vegetable.

I smiled at him and lovingly said, “No, our dinner would be ginataang tilapia with petchay.”

I soon realized that the smell of gata was all over the house.  I forgot to use the exhaust fan.

I really do not have the slightest idea that Bunso is that observant, even to my cooking.

My Bunso once told me, “mama, we are now in addstraction.”

Confused, I asked him to elaborate.

“We are now in addstraction.  It is like five minus three is two.  Addstraction!”

We did a little briefing re mountain climbing.  This mother enumerated to the boys the do’s and don’ts of walking along steep trails of mountains.

bunso: is it cold there? up the mountain?

Bunso: will there be snow?

Bunso is really looking forward to playing snow he often sees on TV programs and books.

We gave the boys an Angry Birds puzzle board.  On their first few puzzle solving moments, I saw their excitement and even heard a few arguments.

A day after, I saw how the boys put the puzzle pieces on the puzzle slot with ease. I looked closer and found out that they wrote guide words for each puzzle slot. 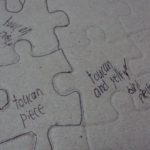 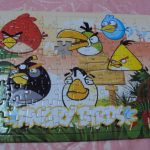 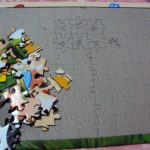 We again bought a new Angry birds puzzle board. This time, the puzzle does not have a board where the pieces could fit in.  No cheating for this one, I told myself.

I inspected the new Angry Birds puzzle and discovered numbers written at the back of the puzzle pieces! 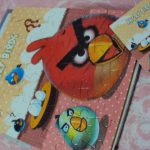 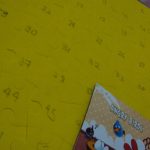