Before we sleep, the boys and I used to gather in one bed then exchange fun stories or anything we would like to share.  Sharing with you some of those bedtime talks with the boys.

I stumbled upon an inspiring blog, guiding light homeschool.  she shared a part of her house, the walls of our home.  It inspired me to post our own art wall.

Though I had an emergency appendectomy, God turned that misfortune into a blessing.  I got to spend more time with the kids. Our usual after-school activity would be coloring posters and books.

With overflowing posters neatly tucked inside a box, we then decided to display everything.  This would even inspire the kids to draw more, color more, and enjoy art.

We converted the boy’s idle bedroom wall into an art wall.  Posted are some of the kids’ colorful arts. 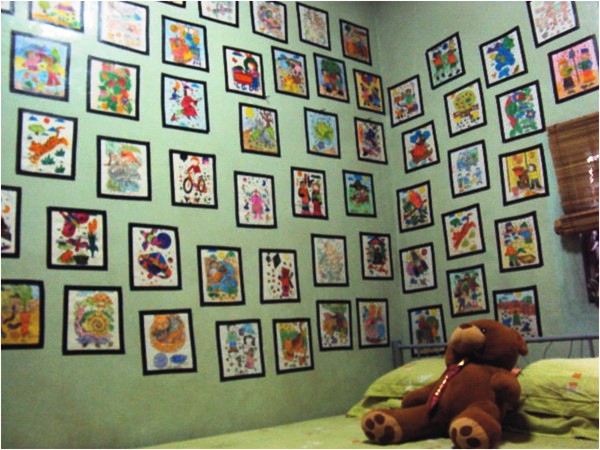 Once upon a time, there was a girl named Ate.  She had a boyfriend by the name of Neo.  They got married and managed a school business.  They called the school Ateneo.

-first born’s bedtime story to his brother on how Ateneo the school got its name.  Firstborn  at that time was eight years old.

The boys and I wear sleeping socks. 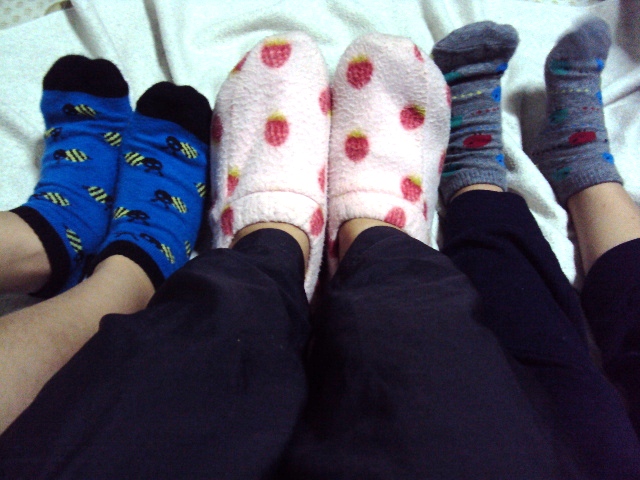 This mother applies on her feet the mango mandarin body cream her good friend gave months ago.  She’s been doing that for months believing that the cream and closed soft shoe tandem would help protect her feet from dryness and cracking.

The boys requested to have their own pair as well.  They told their mother that their feet get cold during the night.

Bunso named his gray socks SOXSIE.  His socks have funny faces design.  His mother bought the socks at Forever 21, an American chain of clothing retailers offering fashion and accessories for mostly young women.

The new house help, upon seeing the colorful socks, also asked this mother to buy her a pair.  And she wants it in pink. Hmm-

This mother suddenly woke up from her sleep.  She saw her bunso wide awake, staring at her lovingly.  It was the most beautiful experience she had for years.

The three kids and I were talking about Baguio, the most recent trip I had.

momi:  Baguio is said to be the summer capital of the Philippines because it is cold there even during summer months.

bunso:  Why is it cold in Baguio?  Is it part of United States?

second son:  … because Baguio is a valley

firstborn:  And valley is like a mountain but has a flat surface instead of a pointed top.

bunso:  You should not go back there, mama.  What if you fall from the top? I don’t want anything to happen to you, mama.

bunso: Mama, why did the boy ask for money?  (Bunso was pertaining to the scavenger we saw so many weeks ago)

momi:  Becausr he has no house.  he has no mama.  He sleeps on the street.

bunso:  What is a street?

momi:  Street is where people walk.

bunso: A. sidewalk.  I don’t want to sleep there.

bunso:  Becausr the car might hit me. I don’t have clothes there.  No water.  No food.  No computer.  No telephone.  No toys.  I will die there.  I don’t like there.

momi:  You will never sleep on the street, my bunso.

bunso:  (then bunso hugged his mama so tight)

I went home early tonight.  I had the chance to play with the boys   I got my bag first and trashef some unnecessary things.  I found a piece of Columbia’s Super Asim Yakee gum ball inside my bag.

Bunso got the candy and asked if he could have it.  I nodded.

After a few seconds, bunso came near me and whispered, “disgusting!”  He ended his naughty remarks with again, a grin.

Another new word he learned from Squidward of Spongebob Squarepants.

second son:  What does SWEAR mean?

bunso:  How about MERCY?  Phineas from Phineas & Ferb says Candace, have mercy.”

momi:  (gave the boys her 1st year highschool-old Tagalog-English Dictionary).  While watching TV program and somebody says something that you do not understand, use this dictionary.

The following day, this mother saw the dictionary beside the television set. 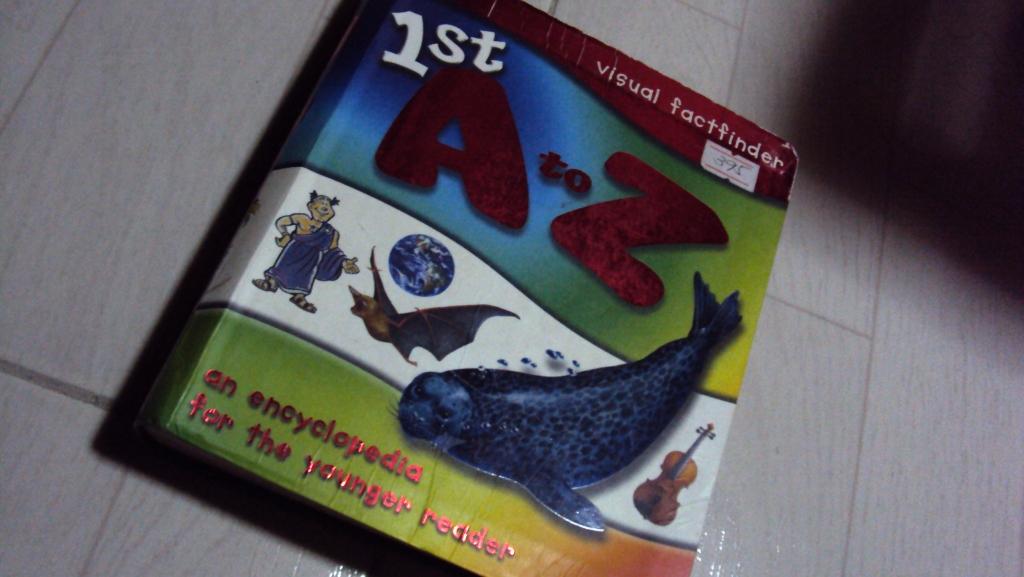 momi:  Did you play outside this afternoon?

second son:  Mama, when will the rain stop?

momi:  We will look for the answer in your encyclopedia then.  (when  will my boys stop asking questions?  But seriously, I am happy the boys are very curious about things).

second son: Tony says, “my plan is working terribly. What is plan b? I have no plan b.”

momi: Who is Tony?

firstborn: Tony is from Supa Strikas.   What does terribly mean?

momi: Terribly means to a great extent. How were you able to know the meaning of terribly, second son?

second son: The dictionary has no terribly word thus I just invented the meaning of it.

second son: From how Tony used the word ‘terribly’ in the sentence.

* Supa strikas is a soccer-themed animated television series about the world’s greatest football team. It is being played in Disney channel daily at 10am, 4;30pm and another 10 in the evening. That info came from my two boys.

momi:  Very good, bunso.  (Then saw second son get off the bed, faced the window, kneeled down)  * from our bedroom window, one could clearly see our subdivision’s small chapel right in front of our rented townhouse).

momi:  Did you thank God for all your blessings today?

bunso and firstborn:  (both nodded).

momi:  Did you ask for more blessings and ask for anything you like?  Because God is a good God and he will surely answer your prayers.

bunso:  Weh?!?  Why before, I prayed that I be the first honors in our class but I ended up second.

firstborn:  You don’t simply pray.  You have to act what you pray for.

second son:  You don’t pray only.  You have to study hard to be the first just like what I do.

I went to bedroom.  Turned on the netbook and readied myself for work. Bunso went near his mother and asked, “What are you doing?”

“I am about to work,” the mother said.

“Is this your office?”was the confused question of the five-year-old boy.

I turned off the netbook and decided to just sleep.

The boys love singing Spongebob’s the Camp Fire Song song. And they are thrilled when husband announced that we will be trekking Mt. Makiling come Holy Week.  We will set up camping tent and will spend the night on the peak of a mountain.  Bunso reminded me to buy hotdogs and marshmallows.  Second son mentioned that husband should bring his guitar with us.

So when I accompanied my mother to her monthly grocery one Sunday morning, I saw this camping tent and unhesitatingly bought it.  Husband laughed off the idea of bringing the tent at Mt. Makiling for the wind will just blow it away.

I decided to set up our tent inside our bedroom instead.  And as expected, the boys are ecstatic. 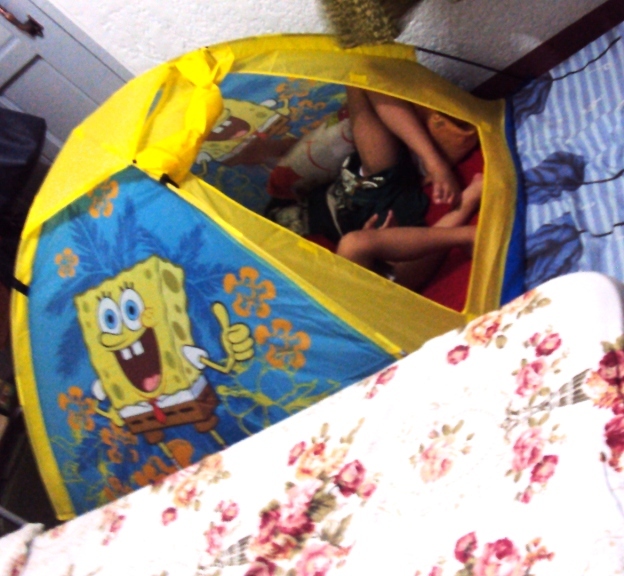 Not finished yet but the idea is to cover our bedroom wall with various photos of us.  We use clothes pin as photo hanger.   We fished out some photos from our photo box, clipped them to the string with the clothes pins.

These photos may make our room look a little off but who cares?  I just want the kids to remember, their father and I included, that we are one family and we will always be there to support and love one another.  Also, these photos will constantly remind us to do things that move us to love.

I hope through this, shouting, blaming and fighting would be lessened and be replaced eventually with sincere love.