When my now 22-month-old son was only three months old, I introduced to him the use of a pacifier.  My only reason that time was to see if a pacifier could help him stop “chewing” his hands.  But then I failed.  He preferred his hands than any kind of binky. 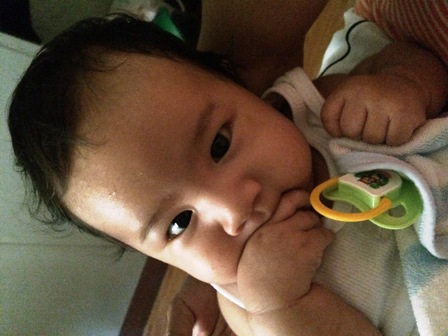 MOMI DISAPPROVES Pacifier| My Little Man at three months. Gave him a pacifier but he still preferred to chew his hands than his new binky.

After that, I did not push the use of a pacifier anymore.  Some of my mommy friends relayed to me as well the disadvantages of a soother and I considered their concerns as valid.  This momi shares a few drawbacks of using a pacifier.

Studies say that prolonged use of a pacifier may lead to dental problems.  It may misalign teeth, change the shape of the roof of the mouth, and even cause problems with the proper growth of the mouth.

With constant use of a pacifier, the baby may become dependent on it that even on his sleep, he looks for his binky. When the pacifier falls out of his mouth during his sleep, you may face frequent middle-of-the-night crying spells as he asks for his pacifier back.

I did not understand this at first but then further readings led me to discover that pacifier sucking promotes fluid collection in the ears which can lead to ear infection.

A wide range of disease-causing bacteria, fungus and mold are found on pacifiers.  This is because these artificial nipples designed for babies to suck on for comfort may often fall and collect dirt in the process.  As we reach for the pacifier, we may also have dirty hands which may put our infant at risk of getting a disease caused by dirt and bacteria.

It is but crucial for babies to learn how to soothe themselves without props.  But more than anything, it is more important for mothers to stand by what she believes in.  Again, I reiterate.  I disapprove the use of a pacifier and in no way use it to calm my son.  It is my stand and I respect others who find binkies, pacifiers or soothers as helpful for them and their babies.  After all, we have our own opinions and just because someone’s opinion is different from mine does not mean he is wrong.