October 17 is my birthday.  With an initial plan to file for a vacation leave, I picture myself fetching my kids at school and eating at our favorite diner.  An assignment to do white water kayaking at San Jose in Tarlac surfaced that I need to forgo my plans.  After all, I haven’t experienced the sports yet and why not try it on my birthday.

As my travel buddy described it, “white water kayaking involves paddling and maneuvering a kayak across river currents.  The intensity of rapids may range from easy with no serious obstacles, to extremely difficult and violent depending on the weather and water level.” Seemed easy, so off we went.

From my initial try, I immediately learned that I have to balance well or else, the boat will turn upside down with me in it.  Also, it is best to try the sports on a rainy season with the river too deep and its flow too powerful (that it can even toss, drop or flip the kayak over the water on its own).

For those who would like to experience the rapids,  San Jose Tarlac is only about four hours drive from Manila.  Coordinate with the Rapid Stream Eco Tour, the sole operator of kayaking trips in the Bulsa River.

Before trying the rapids, we went through a safety briefing then drove to the mountain village of Maamot for about 20 minutes. 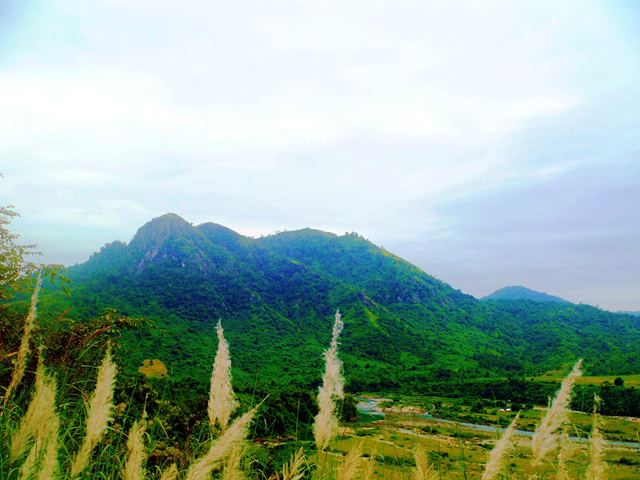 We reached the bank of the Bulsa River in no time and played with the clear water for a few minutes. After which, we started paddling our kayaks. 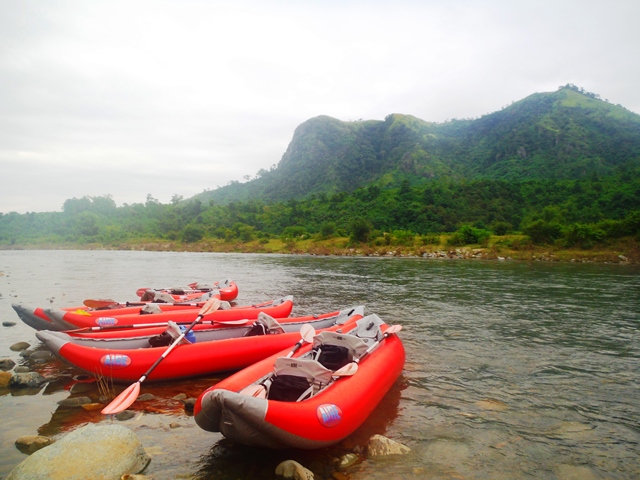 The rapids were smooth and gentle to moderately quick, and the passages between rocks were clear and open. 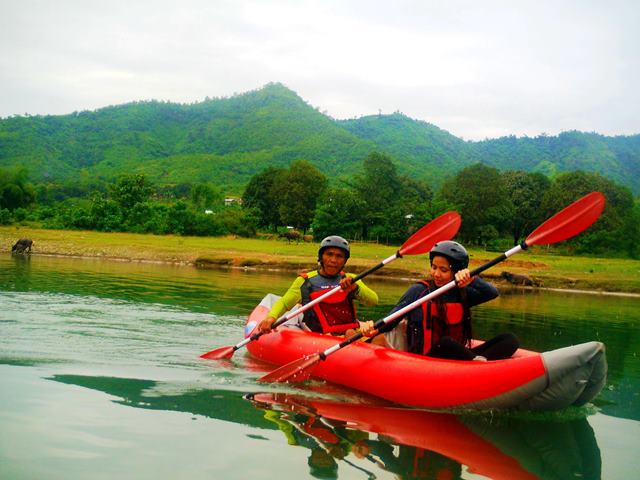 Gliding through the water of the Bulsa River gave me time to appreciate nature and even compare the charming rural scenes from that of Fernando Amorsolo’s paintings. 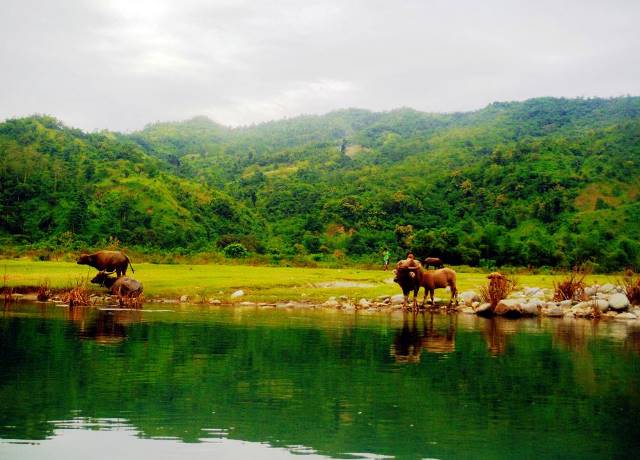 All along, I thought everything would be smooth and gentle.  The river became the opposite of calm, and the current was at its most powerful that I expected we would be under the water in no time. 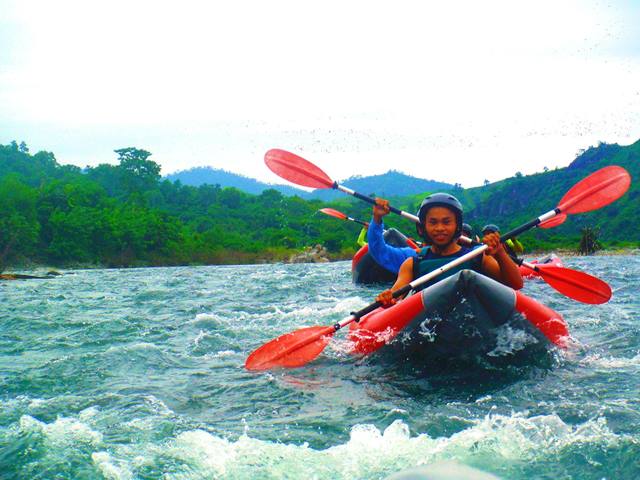 Shortly after that, the river went back to a calmer mood once again, inviting us to gaze upon the majestic mountains looming in the distance and to bask in quietude as we recover from the adrenaline rush. 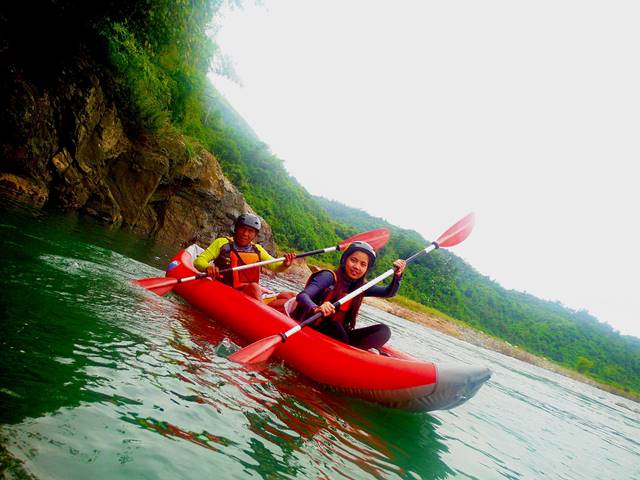 After an hour of paddling, we reached the deepest point of the river.  We were told that it is the best spot to do some cliff diving. 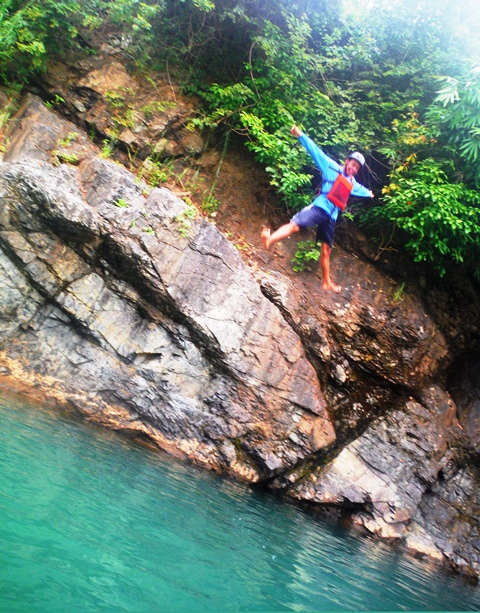 Yes, cliff diving.  If not for the braveness of my travel buddy, I would not dare try it.

I jumped from a cliff!  And it was a  liberating experience.  Sadly,  no one took my photo as I was the trip’s photographer that day.

[tweetshare tweet=”Best advice I could give: enjoy the time spent in the air.  Such a great sensation to feel like flying.” username=”SPk3(ad*e(5d4@pEwem@tnlADFb9ZZc8:1:1″]

Going through all of the 7.2-kilometer stretch of the Bulsa River took us about three hours.  As we came near the end of the river, another high current welcomed us.  The locals call this portion “washing machine” describing the water’s whirling motion.  Paddling here was hard as we need to go against the current and our primary goal was to fight off the turbulent rapids to prevent our kayaks from being washed away.

Again, we survived. And it was an experience I hope my boys would someday experience too, but with the company of expert canoeists. 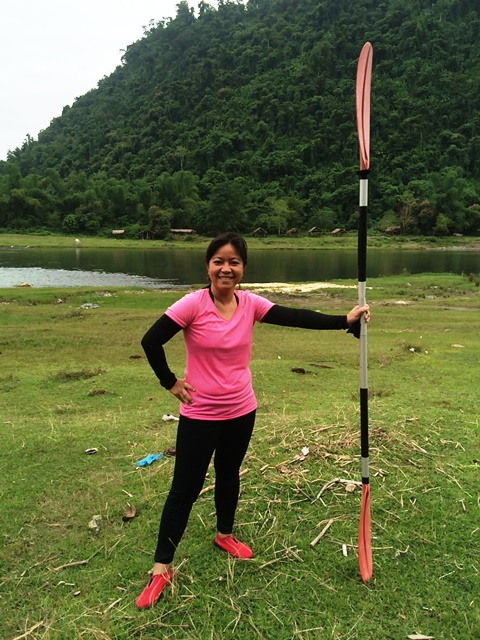 So for those who would like to give white water kayaking a try, you need not travel far all the way to the Chico River in Kalinga or down south in Cagayan de Oro.  In a quiet town up North, just four hours road travel from Metro Manila, you will find the Bulsa River of San Jose Tarlac as a good start.

Good thing I have experienced kayaking and cliff diving myself so I would know if these are recommendable sports for my children to try.  And I wish my boys would have the courage to do them in the future.  They are fun and enjoyable, but utmost presence of mind and attentiveness are needed.

Kayaking the rapids of Tarlac gave me some strained arms, but the adventure amid nature was worth it.  It gave me a good mix of adrenaline rush and peaceful solitude.

On our way home, an image of my boys hugging me repeatedly played in my mind.  I drifted off to sleep after my head collided with the small pillow, slept dreamlessly, and awoke to feel somehow recharged.

I hailed a cab from Munoz, Quezon City to bring me to the small house where a surprise was waiting for me — 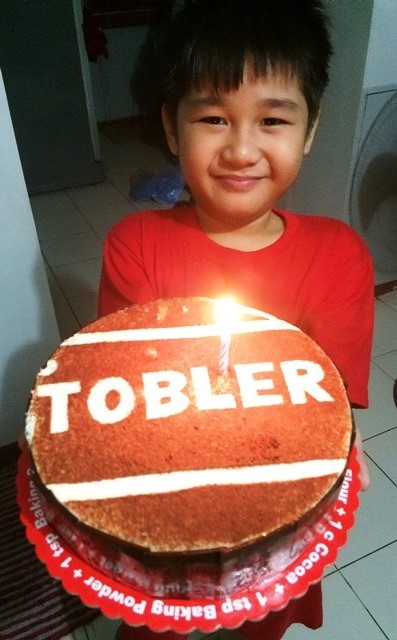 How about you, would you like to spend your weekend in Tarlac and do some white water kayaking and cliff diving?

* The first time I jumped off a cliff was October 17, 2014.  It was a fun experience and a fun way to celebrate my birthday.  Should I try it again?  Perhaps not anymore.  Once is enough.  I have a six-month-old son to attend to after all.