I do not know how to drive a car. So when I told my mom I would go to the Baby Company Grand Baby Fair, she readily offered a ride.

We came on a Saturday, and as expected, there were a lot of moms and dads shopping for their little ones. I can compare the Grand Baby Fair scenario to our subdivision’s traffic situation every Monday. Cars are heading to the north and in one lane are vehicles making their way to the south.

At the Baby Company Grand Baby Fair, almost all were busy pushing carts, making a few stops on stalls that interest them. Though jam-packed, everybody was just too courteous to let a pregnant mom go ahead or let a baby in a stroller pass first. After all, they marched to SM Megatrade Halls 1, 2 and 3 with almost the same goal — to provide their little cutie pies their needs and wants.

END_OF_DOCUMENT_TOKEN_TO_BE_REPLACED

Unlike our last weekend, we wake up rather early this Sunday hoping to still catch some rays.  Our little munchkin is again flashing his toothless smile and we just need to celebrate. His fever has subsided, his stuffy nose about to clear up. Oh, thank you, dear Lord.

END_OF_DOCUMENT_TOKEN_TO_BE_REPLACED

He cannot say sorry personally.  But he made it a point to get the message across by writing his thoughts on a paper. He was not aware though that I have forgiven him before his message reached me.

I love you, son. And yes, you are always forgiven.

We are not rich. There are a number of times that we prioritize what to pay first, even disregard those that can wait, and most often set aside our own needs just so to provide for the boys.

It’s only husband who works for the family while I am left at home to look after the three boys and now our new born baby. Aside from the daily cleaning and cooking, I am also in charge of the weekly marketing and helping the boys with their school works. Husband helps with the ironing of clothes. Getting the services of a house help will surely add up to our expenses, thus we do the cleaning ourselves. Even the boys share some household responsibilities. I know they would want to complain sometimes, wondering why they need to work at home while their classmates could play COC all day on weekends. But because they are courteous and responsible, they would rather keep to themselves their displeasure or perhaps, even resentment.

END_OF_DOCUMENT_TOKEN_TO_BE_REPLACED

Making up for lost time.

My Big Bunso is waiting for customers to come in at McDonald’s Mindanao Avenue branch in Quezon City.

END_OF_DOCUMENT_TOKEN_TO_BE_REPLACED

From afar, I could see that Firstborn is enjoying his soccer class. He smiles as he kicks the ball, high-fives with team members, and claps every time their team makes a goal.  He chats with new friends during the water break and observes each player in the field.   A summer activity made possible because this mother has time for her kids now. 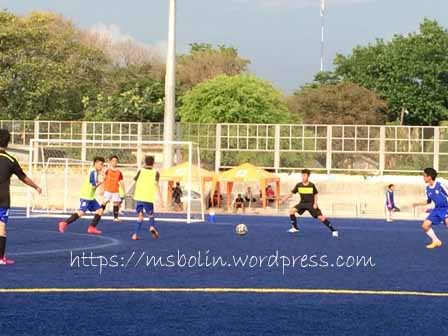 First-born (in black with wide green striped jersey) chases after the ball during their practice at Circuit Makati in preparation for their tournament on May 30, 2015.

END_OF_DOCUMENT_TOKEN_TO_BE_REPLACED

Saturday was the day when husband and I were the proudest. We have two boys who kept going up and down the stage to receive academic distinction and inter-school achievement awards. Though the program was rather long, it didn’t take the smile off our face. Thank God the weather was also very cooperative.  Everything the students practiced for five days wasn’t put to waste.      And everything we sacrificed and gave as parents were all worth it.

Again, thank you, Lord, for giving us such industrious and loving boys. We are so proud of them.  May they continue to be a blessing to us and to others. They might just don’t know how much happiness they give to us, but sincerely, we as their parents are truly blessed.

END_OF_DOCUMENT_TOKEN_TO_BE_REPLACED

That was my Firstborn’s Facebook status.  He sounded excited for that day’s tomorrow.  And this mother prepared something for her binatilyo.

1.  believing in health is wealth

Though very cliche, still health is wealth.  After our breakfast, we visited our favorite pedia.   The boys got their second dose shots to protect them against pneumonia,  hepatitis a, diphtheria, tetanus, and pertussis.

Vaccines do save lives, but most children do not like shots — my boys included.  Our pedia visit wasn’t a pleasing one, especially for Firstborn who cried after receiving the vaccinations. The terrifying injection made him all gloomy throughout the trip to the hotel  (where we checked in for the night).  He simply could not accept that he needed the booster vaccine on his birthday.

END_OF_DOCUMENT_TOKEN_TO_BE_REPLACED 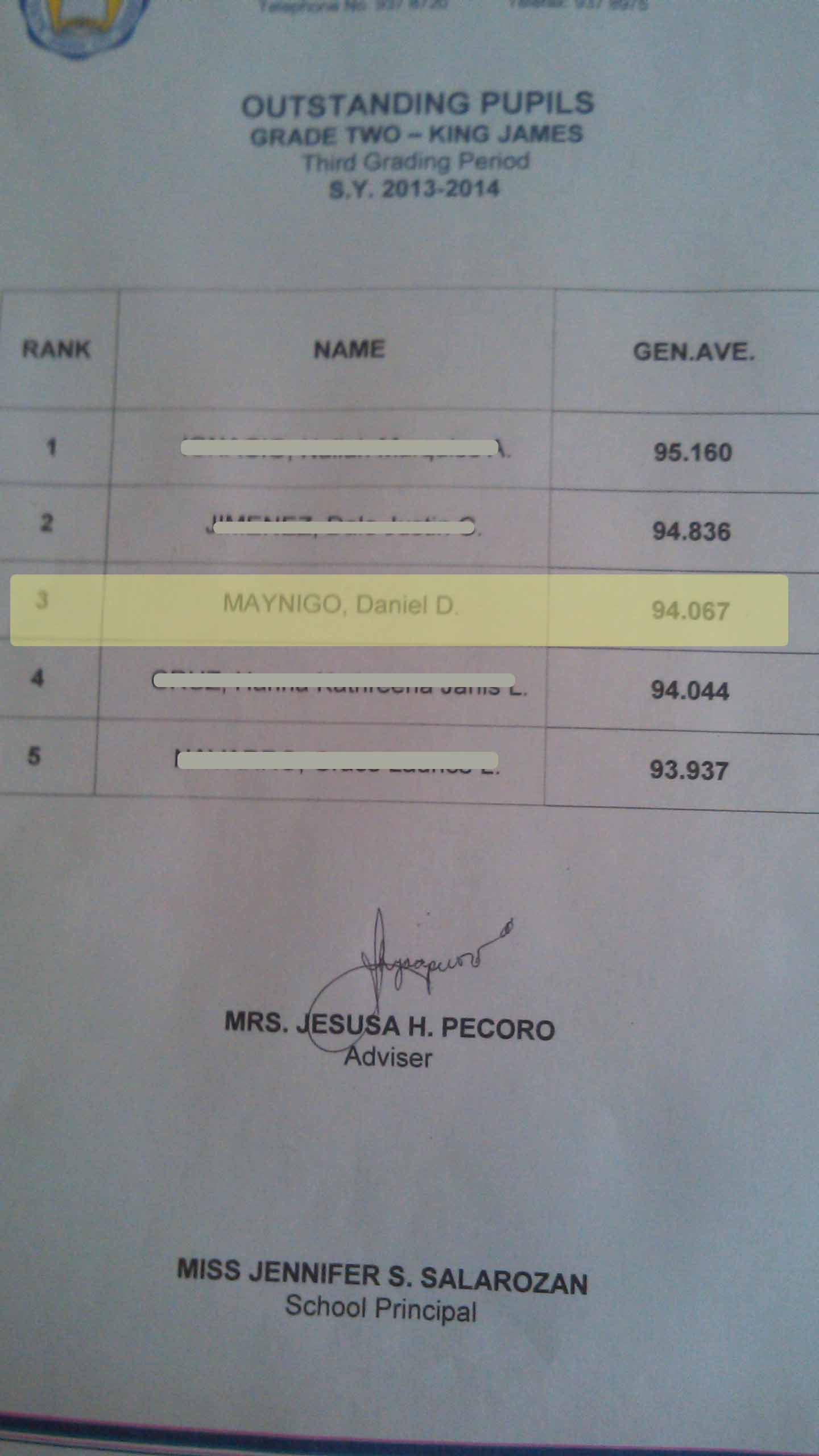 How was Big Bunso’s performance for the third quarter ?  His class standing slid down from second to the third rank.  His general average though improved from 93.50% to 94. 06%.

He woke up early that Sunday.  He reminded me that I  need to see his teacher and get his report card.  He even requested if he could come with me.  He was very eager and excited to look for his name at the bulletin board.

I was also confident that day that he will be part of the honors roll.  He treats his schooling with great importance.  Sometimes he would stumble, perhaps to remind him to slow down a bit, but he would always stand up and keep moving.   Why?  because more than fame, he would always tell me that he wants his mama be proud of him.

I am always proud of you, Big Bunso!

END_OF_DOCUMENT_TOKEN_TO_BE_REPLACED

Our family has been so blessed.  My three boys got academic recognition from school.  Even the husband passed his Real Estat Broker Licensure Examination that same month.

Bunso has successfully completed the casa curriculum prescribed for Casa level by the Department of Education.  Aside from his diploma, he also graduated fifth honors.  He was his class’ best in English and best in Writing as well.  Teacher Luz also commended bunso’s diligence and gave him the most industrious award. 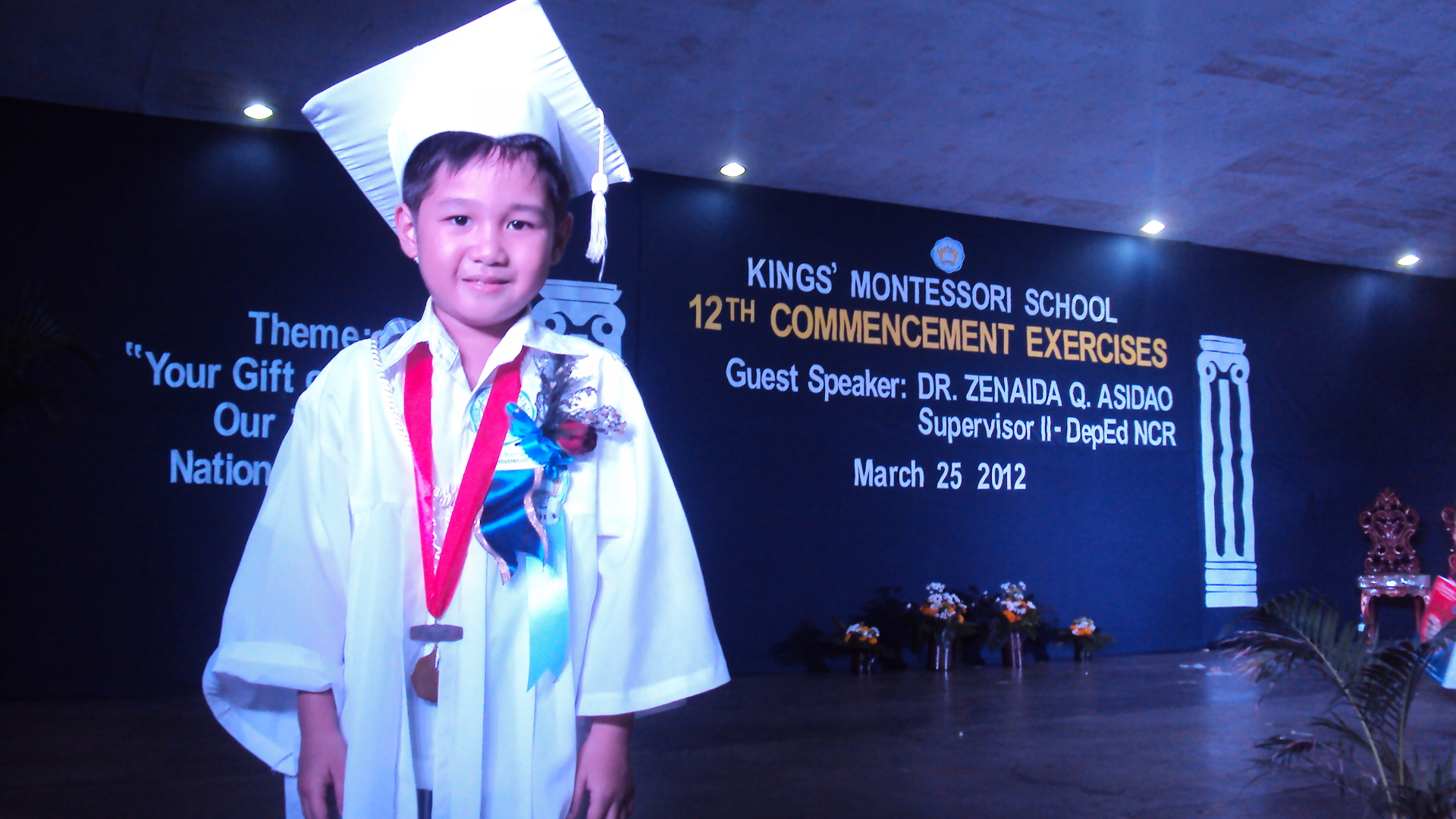 Academic recognition/ Our bunso and his medal.He graduated fifth honors 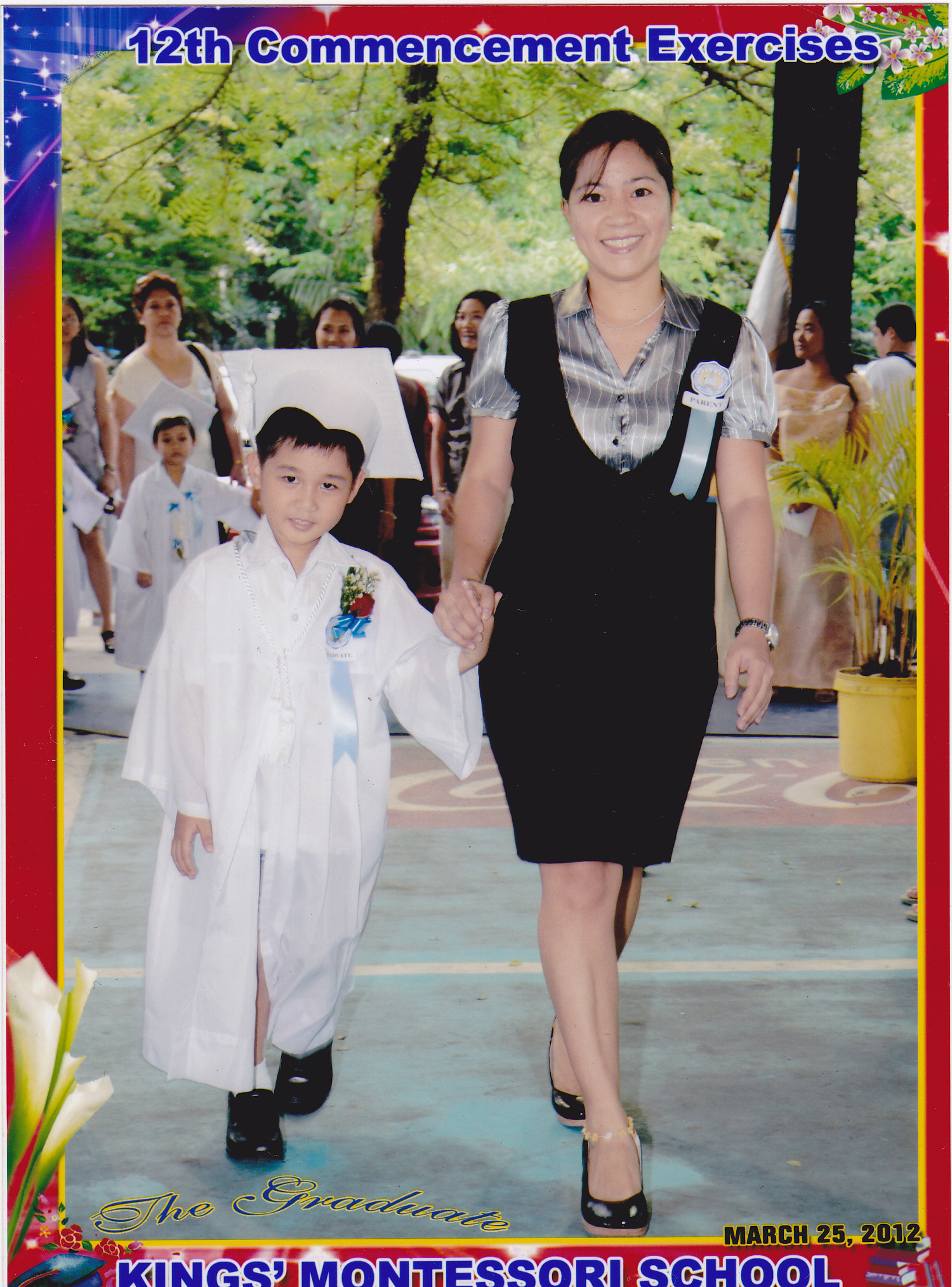 Academic recognition/  Momi Berlin walks her Bunso during the processional.

The second son had his share of moments when he repeatedly went us and down the stage.  He received a number of awards on his Recognition Day.

He placed second honors.  He bagged two academic recognitions –  Best in English and Best in Mathematics.  And aside from his scholastic achievements, he also received the following recognitions: most behaved, most active,  most responsible, most honest, and most obedient.

The school also commended him for representing the Montessori on the Battle of the Brains for the primary level. 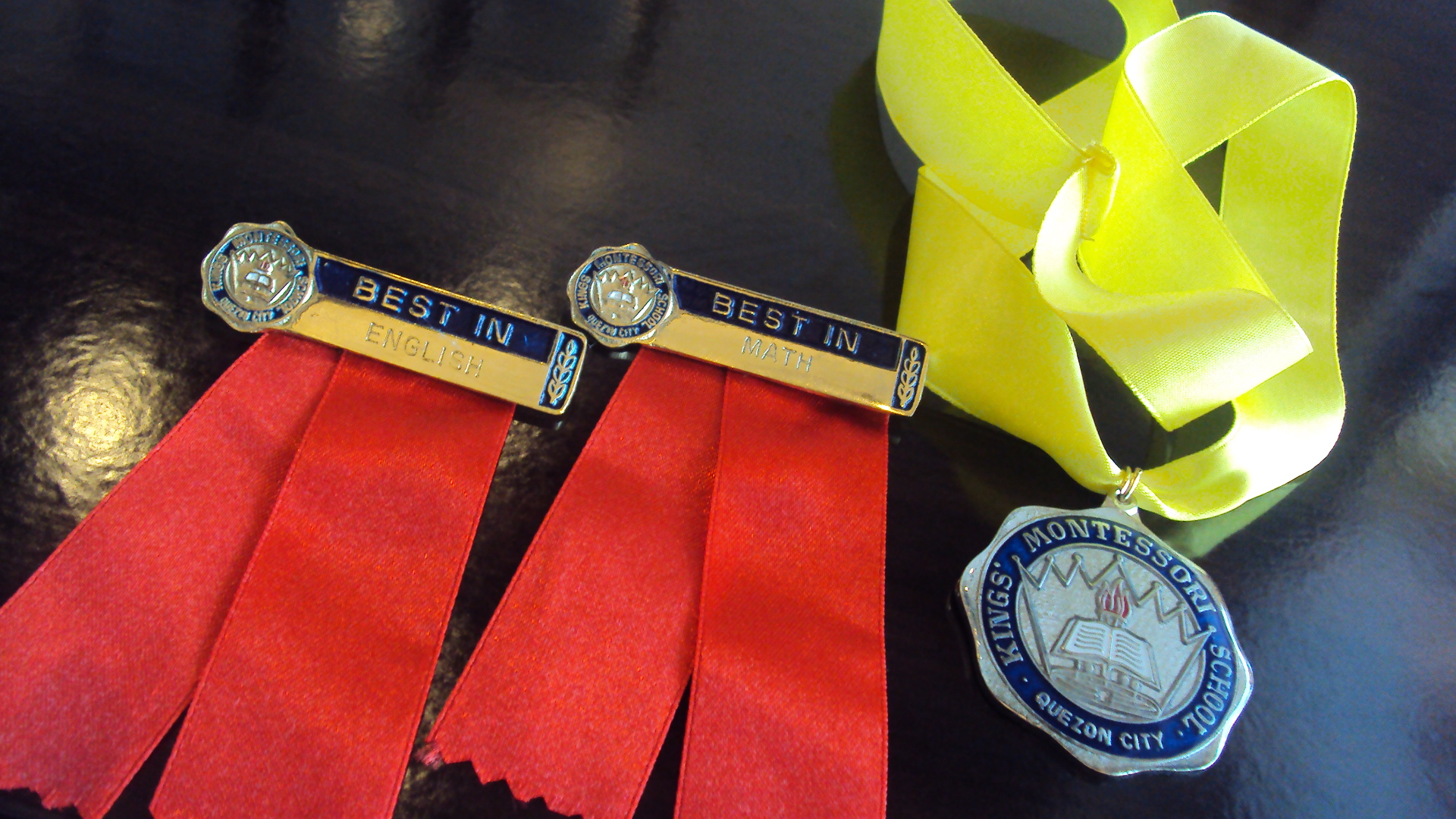 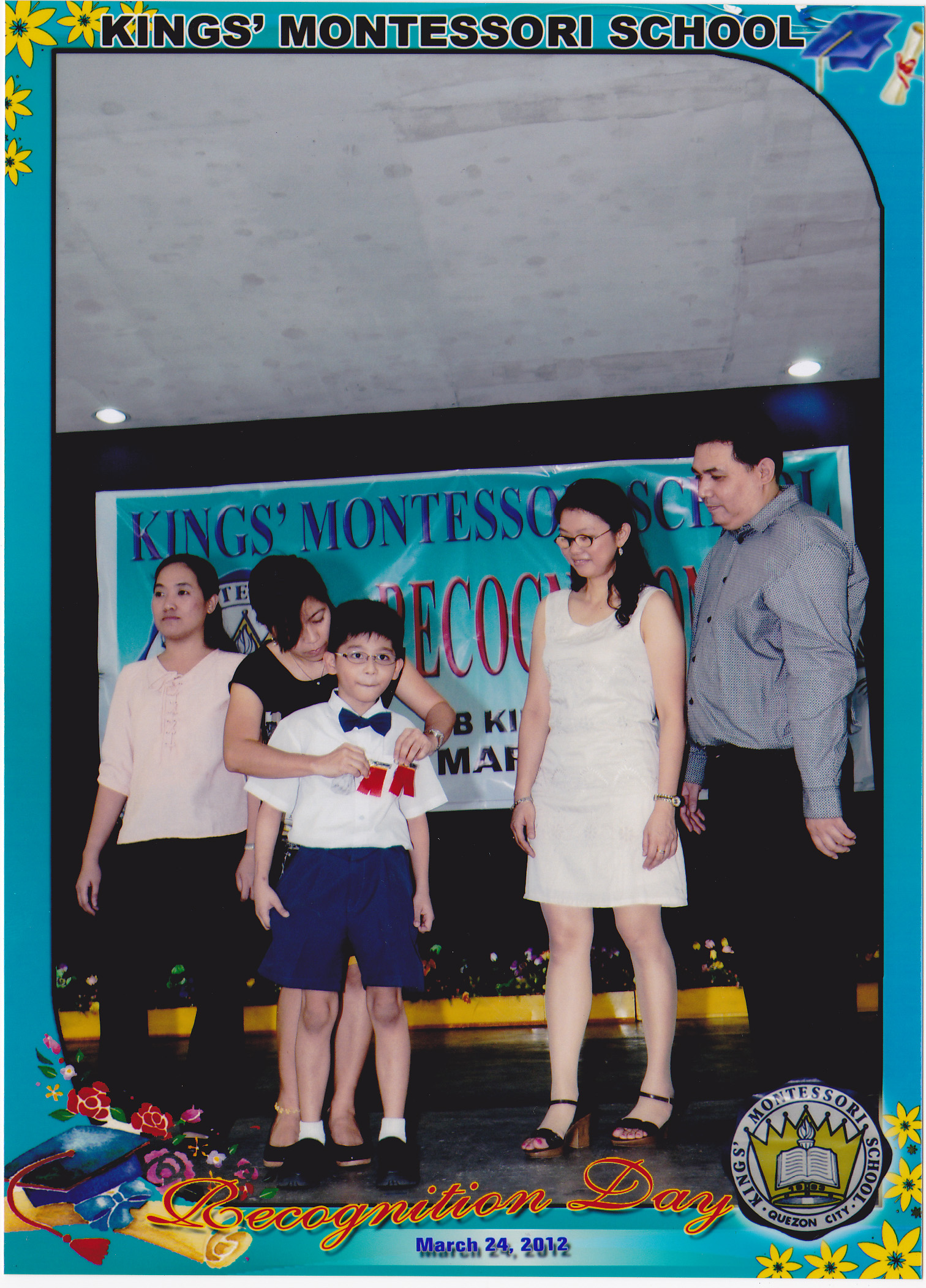 Firstborn son got three medals for the following achievements:

2.  Excellence awardee for Best in Music.

3  A special award for getting the highest increase in general average for the school year 2011-2012. 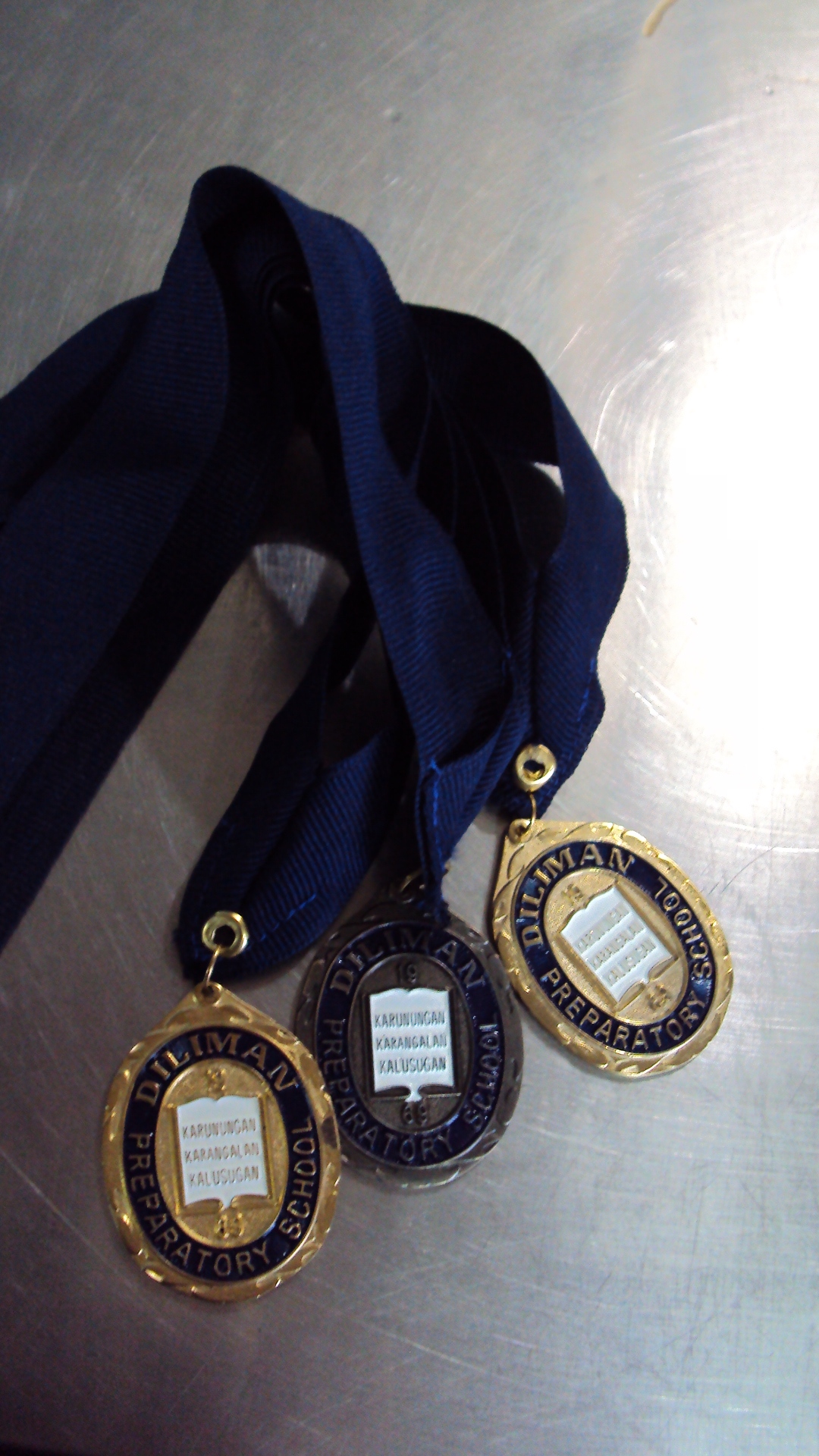 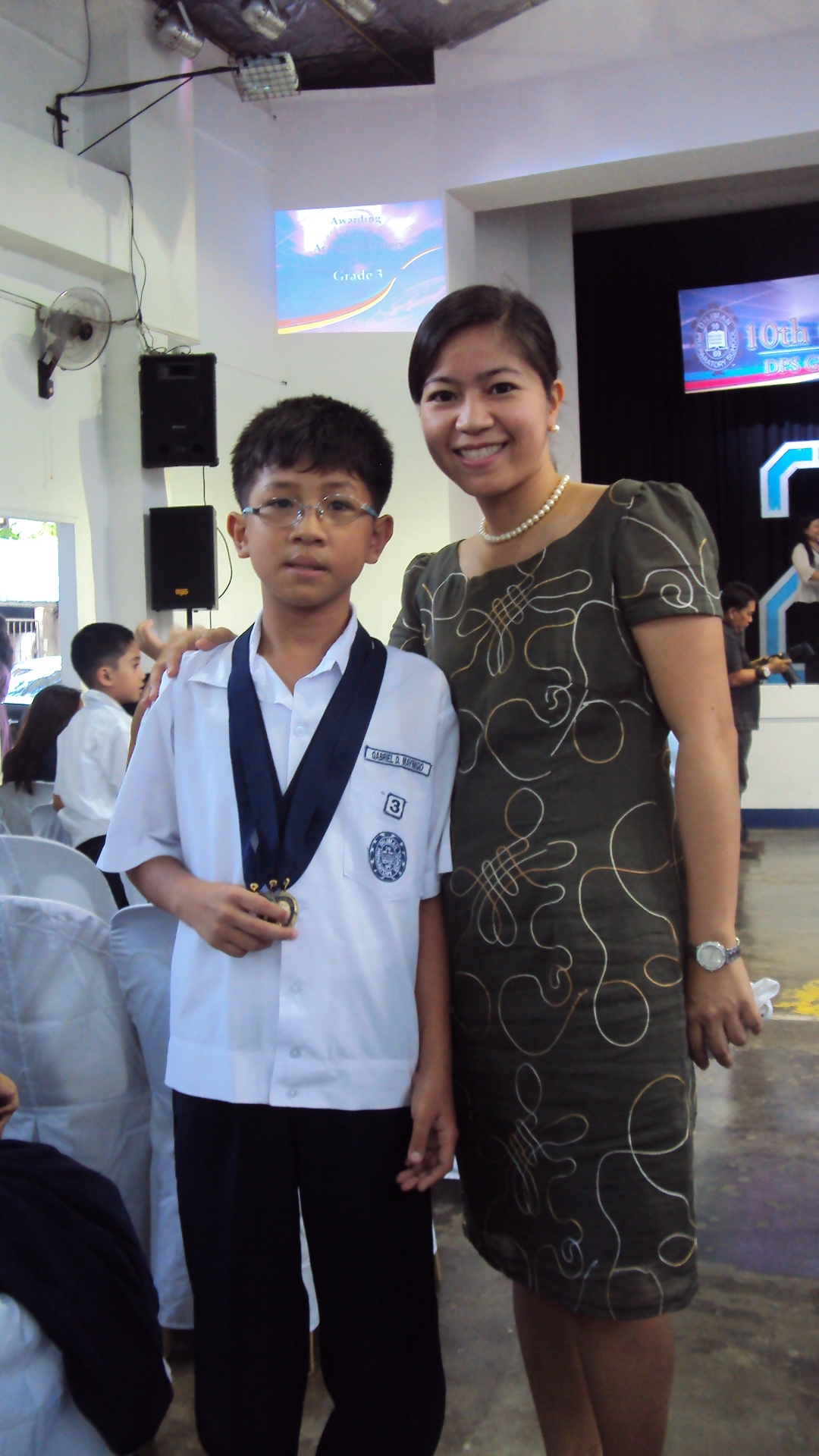 I truly thank God for giving me a husband who has a career that can support his family so I may be able to stay home and look after our boys.

And I thank Him again for giving us three healthiest, most loving and beautiful, and the smartest children in the whole world.