The city of San Fernando in Pampanga has enthralled the curious for centuries. Blessed with a rich soil, excellent location, and the creativity and perseverance of its citizenry, San Fernando continues to attract traders and travelers for more than 200 years. Despite thriving in a fast-paced modernization, it remains an old soul with its well-preserved communities- American Colonial-inspired mansions with winding staircases, high ceilings, and secret hiding places. These mansions, with their Amorsolo paintings, grandiose chandeliers, antique furniture and unique collections are a vestige of the colonial rule- Spanish, American and even Japanese.

San Fernando’s heritage district is a joy to discover. Here are three mansions worth visiting.

A portrait of Mr. Vivencio Baron Cuyugan with his loving wife Felisa.

The Baron Cuyugan house was the residence of Vivencio Baron Cuyugan, the first Socialist Mayor of the Philippines.  The two-storey mansion was initially built in 1870s but had undergone renovation in 1935.  The overhaul included a front porch, which Cuyugan saw when he spent time in the United States.  Cuyugan drew inspiration from the American Colonial design with four pillars standing as sentinel on either side of the front door.  But Cuyugan could not part with the 1870s wood panels, insisting on using it as scaffold for the renovated house.

According to Vince Cuyugan, Cuyugan’s son who still lives in the property, his father inherited the house from his aunt.

The house’s Capiz windows harks back to 1870 as well as the hand-carved “S” wall molding which stood for Silvestre Baron, the late Cuyugan’s aunt. As with most old houses, the Baron Cuyugan mansion has high ceilings. Vince explains that most pre-war houses had high ceilings simply because there was no air-conditioned systems back then. When the weather was hot, all they had to do was open the windows so the heat would rise.  Another prominent feature of the Baron Cuyugan house is its non-welded wrought windows, a style known in the olden times.

Outside the house rests a statue bearing the bust of the late Cuyugan. It is also here where Cuyugan remains, as well as his wife, are interred.

The only mansion in Pampanga with a dungeon, as relayed by the younger Cuyugan.

But what makes the Baron Cuyugan house stand out is its participation during the Japanese invasion. The late Cuyugan was one of the founders of Hukbalahap, an anti-Japanese guerilla movement.  To escape the arrest and torture of Japanese soldiers, the elder Cuyugan made a dungeon in his house.  Family members and Hukbalahap associates would crawl into the dungeons of news of Japanese arrival would occur. Alas, the Baron Cuyugan house was seized the Japanese, turning it into a Municipal Hall of San Fernando.

A few streets away from the Baron Cuyugan house is the Santos-Hizon House, now known as the Augusto Hizon House.  Built at the turn of the century by Teodoro and Africa Ventura, the Victorian-style mansion was bought by Maria Salome Hizon, a Red Cross volunteer during the Philippine Revolution.  It was then inherited by her brother Augusto Hizon.

Like the Baron Cuyugan residence, the Augusto Hizon house exemplifies the American Colonial architecture. Visitors are immediately impressed at the winding staircase leading to the house’s portico, made more elegant with Machuca tiles. The multi-colored tiles, whose history traces back to 1900s, feature Mediterranean motif tiles.  San Sebastian College and San Beda Church are among the popular structures that feature Machuca tiles.

Inside, the Augusto Hizon house showcases antique furniture, portraits of its ancestors as well as an exquisite collection of hand bells, brass and crystal alike.

A 14-seater dining table is the highlight of the mansion, perfect for formal gatherings of the privileged and rich.

The Augusto Hizon house currently serves as the residence of a Hizon heir.

Another house appropriated by the Japanse government to serve as residence of its 14th Army Commander of the Japanese Imperial Army, the Lazatin House is imposing even from the façade. Built in 1925 by sugar farmer and former president of SFELAPCO(San Fernando Electric Light and Company), the Lazatin house is another San Fernando mansion with an American Colonial motif. 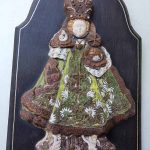 An old Santo Nino by the door

A staircase leads to a centered front door, flanked by windows on either side.  According to Marco Lazatin, an heir, the house was the last one to be built in the town’s border. On the town’s border stood Pasudeco, the first Filipino financed sugar center in Pampanga. The late Lazatin was one of its founders and everyday he used to walk from his house to the center until he decided to construct a house near Pasudeco.

So homey. guests may stay here as they wait for the Lazatins to go down.

This huge impressive center piece greets guests as they enter the Lazatin mansion.

A 16-seater dining table perfect for reunions and special gatherings.

The Lazatin house is perhaps one of the most well-preserved mansions in San Fernando’s Heritage District.  The Lazatin family even started a foundation for the mansion’s upkeep. A tour inside the Lazatin house verifies this. Inside, the house boasts of a formal dining room filled with various knick knacks accumulated by Marco’s aunts from their trips around the world- chinaware, porcelain and ceramic figurines, and plates are arranged side-by-side with an antique piano, modern furniture, traditional Grandfather clock and family portraits.  Marco points out that his grandparents’ portraits were done by the great Filipino maestro Fernando Amorsolo himself.  Going up the winding stairs fuels more drama. The Lazatin house’s second level features the same ornate decors downstairs as well as a few unique finds.

A hallway full of photos from the first geneneration to the newest heirs. 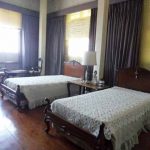 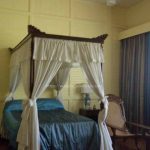 Canopy beds only in fairy tales and heritages houses. and beside this adorable bed is a traditional parturition chair. A chair designed to help give birth, the parturition chair is very similar to a rocking chair, only that it has a low height and longer arm rest for the mother’s legs to place.

In one room there is an old barometer that is said to be a small version of the one found in the old Ateneo de Manila campus in Padre Faura, Manila. The barometer, with markings in Spanish, is still working so anyone will figure out if a bagyo (destructive typhoon) is coming.  In another room lies a traditional parturition chair, a chair designed to help give birth. The chair, similar to a rocking chair, has a low height and longer arm rest for the mother’s legs to place. 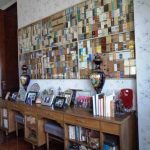 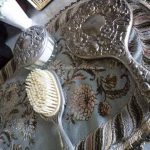 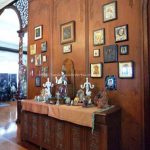 Travel back in time and experience the glorious past of San Fernando, Pampanga. Before summer ends, explore San Fernando’s Heritage District. Getting to Pampanga is easy with Victory Liner, the Filipino’s most trusted and preferred bus companion. Comfortable seats and free Wi-Fi on board services, visitors can easily pay homage to San Fernando’s splendid heritage houses.

To make the most of your tour, it is best to coordinate with the City Tourism and investments Office-City Tourism Division of San Fernando, Pampanga.

* The travel posts from last week until this week are from my past travels.  I am putting everything into writing for my boys to use as reference should they want to consider exploring the country anytime in the very near future.