Recently, we learned of a friend who is suffering from mental illness.  Her father allegedly harassed her that even her mother didn’t do anything about it.  That episode in her life must have caused mental stress.  Statistics say that in the Philippines, rape happens every 72 minutes, and at least one in 20 women aged 15 to 49 experienced sexual violence.  From these Filipinas, half of them took no action.  And that is one sad reality. 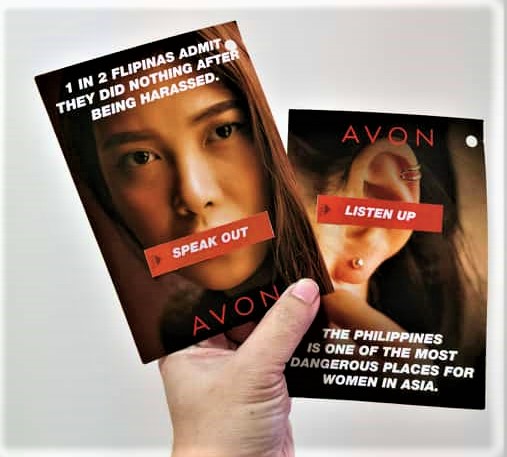 Thus, the best way we can do to support the fight for gender-based violence is disseminating information about it. We also support Avon Philippines as they rally behind UN Women’s 16 Days of Activism Against Gender-Based Violence.  They show their strong advocacy through the launch of the #SpeakOutListeUp campaign.  The campaign encourages victims and survivors to speak out and share their stories.  It is also the aim of the fight to urge everyone to listen up to these stories.

For 16 days, Avon goes orange across its social media platforms.  The color symbolizes a brighter future where women won’t feat violence anywhere.  The 16 days started last November 25 coinciding with the UN’s International Day for the Elimination of Violence against Women and will end on Human Rights Day, December 10.

The purpose of the campaign and orange color is to amplify the message, spark conversation, and raise awareness of the different forms of violence against women.  The brutality women face often hinder them from reaching their full potential; thus, they end up timid, afraid, and quiet.

Part of the 16 Days of Activism as well is the partnership Avon has with the World Association of Girl Guides and Girl Scouts (WAGGGS).  The collaboration ensures more women and girls can identify gender-based violence and know the resources to seek help safely.  The partnership likewise launches a new awareness program for Avon Representatives and girl scouts in the Philippines.  This awareness program is not only for Philippine residents but will also happen in Argentina and South Africa.

This advocacy of Avon doesn’t happen only now.  The company has been steadfast in its mission to empower women everywhere since 1889.  For over 130 years, Avon always aims to make sure women live happy, healthy lives, and this includes putting an end to women’s violence.

If you believe in this cause, let us support Avon as it goes orange.   We are on this fight as support to our friend who was allegedly victimized by this kind of violence. Together, let us support #SpeakOutListenUp.