Discovery Channel had an exclusive advanced screening of People Power:  30 YEARS ON last Tuesday, February 23, 2016 at the Quezon City Museum.  They had this documentary not to reinterpret the facts but to retell and reengage to the younger audience.  The youth might have perhaps know the story but are not fully aware of the details behind.  As what Dr. Vicky Apuan, event host and known historian said, “the EDSA People Power is a story many know yet they do not know the real story.” 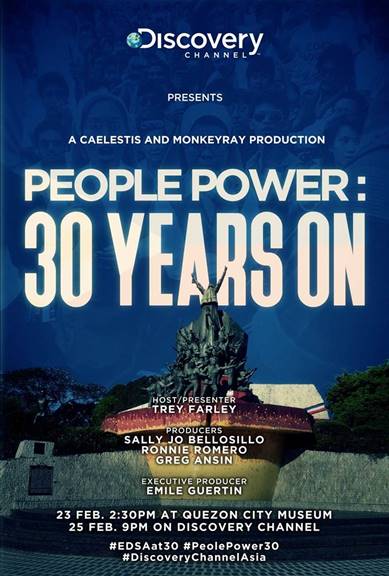 So for those who would want to refresh their memories and truly understand Philippine history – and a part of world history – People Power: 30 YEARS ON will be shown on February 25, 2016 at 9:00 pm at the Discovery Channel.

The less than an hour documentary has never before heard details from the major players of the 1986 EDSA People Power Revolution. Major players of the historical event share their tales from their candid perspectives.  The late President Corazon Aquino,  former First Lady Imelda Marcos, and  former President Fidel V. Ramos, all present their first-hand accounts and detail how they have come to view and understand the event.

Originally shot 10 years ago, Discovery Channel is set to present this short film for the first time on television especially to mark the 30th anniversary of the EDSA People Power Revolution.  To make the documentary more interesting to younger audience, the film likewise includes additional presenter-led links to camera as presented by actor and celebrity Trey Farley.  His links serve to introduce an up-to-date perspective on each chapter of the People Power story, highlighted with his own personal recollections of witnessing the revolution as a boy.  He also re-narrates the entire show, and with an entirely new music score.

Farley is born in Manila to an English father and a Filipino mother.  His most recent work was the “Haiyan:  After the Megastorm” which was shown at the Discovery Channel.

If you are wondering what prompted Discovery Channel to make this special documentary, I had the answers after the advanced screening.  At the very core, Discovery Channel is a storyteller and the EDSA People Power Revolution is part of world history, nor just of the Philippines’.

Present during the advanced screening were the three major players of the 1986 EDSA People Power Revolution — Senator Gregorio Honasan, General Vic Batac, and Col. Red Kapunan.  The three were principal Reform Armed Forces Movement (RAM) figures who plotted the 1985 coup attempt against the Marcos Administration, and other coup attempts against the Cory Aquino administration.

I was deeply impressed with what Sen. Honasan said before the crowd during the panel discussion.  Asked why he plotted the coup attempt against the Marcos Administration, he said in a straight forward tone, “We did it for our children.”

He detailed that the People Power Revolution happened to teach the youth of history.  That they should learn from history and improve it.  Sadly though, they fought because of corruption and wrong government, and yet until today, we are still fighting for corruption.

The spirit of the EDSA People Power lives on and now is the chance to rekindle the fire.  May we not forget the heroism of the key players of that history.    If for Ninoy Aquino “the Philippines is worth dying for,” perhaps our nation is indeed worth fighting for.

I would like to end this post with a beautiful message shared by Sister Sarah Manapol, SPC. She was present during the advanced screening and her major role during the revolution was she provided information to the US Embassy and to Radio Veritas/Radyo Bandido  broadcaster, the late June Keithley.

“When you give everything, it will be given back to you, perhaps in double or triple in quantity.”

Discovery Channel, the flagship network of Discovery Communications, is devoted to creating the highest quality pay-TV programming in the world and remains one of the most dynamic networks on television.  First launched in 1985, Discovery Channel reached 209 million subscribers in Asia Pacific.  It offers viewers an engaging line-up of high-quality non-fiction entertainment from blue-chip nature, science and technology, ancient and contemporary history, adventure, cultural and tropical documentaries.